From A Wiki of Ice and Fire
(Redirected from Obsidian)
Jump to: navigation, search

Dragonglass dagger of the Night's Watch from the Valyrian Steel ® Collection

Dragonglass is the name used by smallfolk for a volcanic glass[1] which maesters of the Citadel call obsidian.[2][3] The Valyrians called it frozen fire.[4]

Obsidian is volcanic glass formed by immense heat and pressure in the earth.[5] Smallfolk like to say that dragonglass is made by dragons, while maesters say it comes from the fires of the earth.[3][6]

Obsidian was used by the children of the forest to fabricate weapons;[6] obsidian blades are sharper than steel but far more brittle.[7]

The Valyrians used obsidian to make their glass candles.[8]

There are large deposits of dragonglass on Dragonstone.[4] It is an export product from Asshai,[9] and possibly the Shivering Sea,[10] while the Skagosi trade obsidian blades and arrowheads.[11] Some free folk carry dragonglass knives.[12][13]

Dragonglass weapons are one of the few weaknesses of the Others.[14]

According to George R. R. Martin,

I've given it magical characteristics that of course real obsidian doesn't necessarily have. After all, we live in a world that has no magic. My world does have magic, so it's a little bit different.[5] 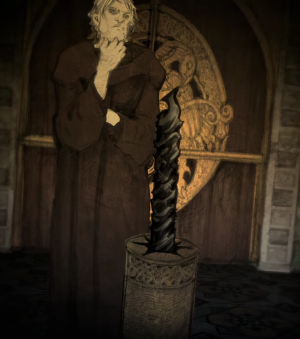 An acolyte of the Citadel attempts to light a dragonglass candle, from Game of Thrones Blu-ray

Ser Brynden Tully has a brooch depicting a black fish in gold and obsidian.[15]

Mors Umber wears a chunk of dragonglass in place of a lost eye.[16]

Dagmer Cleftjaw has rings set with chunks of sapphire, garnet, and dragonglass.[17]

Before acolytes of the Citadel say their vows, they must spend a night attempting to light a candle of obsidian.[18]

A bronze arch in Qarth depicts two snakes mating, and their scales are made of delicate flakes of jade, obsidian, and lapis lazuli.[19]

The dark eyes of Lord Rogar Baratheon have been compared to obsidian,[20] as have the shiny eyes of Ser Alliser Thorne.[21]

The children of the forest made tools and weapons out of dragonglass, including daggers, blades, and arrowheads.[6] During the Dawn Age, the children fought against their greatest foes, the giants, with obsidian weapons, as possibly proved by Maester Kennet, whose study describes a giant's burial at a barrow near the Long Lake, who had obsidian arrowheads amidst his extant ribs.[22]

In their war against the First Men, the children with their dragonglass weapons could not stand against the bronze weapons of the First Men.[6][23] During the Age of Heroes, it was recorded by the Night's Watch that the children of the forest gave the black brothers a hundred obsidian daggers every year.[24]

During the Doom of Valyria, red clouds rained down dragonglass and the black blood of demons.[25][26]

Roro Uhoris sailed Cobblecat into the Shivering Sea to trade steel to the free folk for ivory, furs, amber, and obsidian.[10]

In his turret in Winterfell, Maester Luwin shows a handful of arrowheads to Bran Stark, Rickon Stark, and Osha. Bran examines an arrowhead, noticing that the black glass is slick and shiny. He thinks it is beautiful, and asks Luwin if he can keep one.[6] 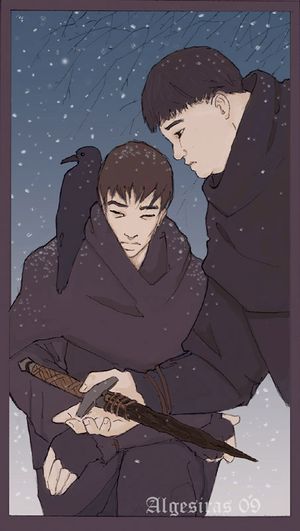 At the Fist of the First Men, Jon Snow discovers a cache of knives, leaf-shaped spearheads, and numerous arrowheads made of obsidian. Beneath the dragonglass is an old warhorn, and when Jon shakes the dirt from inside it, a stream of arrowheads falls out. Jon gives Samwell Tarly a spearhead and a dozen arrowheads as well, and passes the rest out among his other friends for luck.[7]

During Daenerys Targaryen's stay in Qarth, dragonglass from Asshai is among the gifts she receives from people seeking to learn the truth behind the rumors about living dragons. The dragonglass is among the many offerings Daenerys sells to gather the wealth she ends up wasting on the Pureborn.[9] After the death of the Undying Ones, Xaro Xhoan Daxos tells Daenerys that glass candles that have not burned in a hundred years are now burning in the house of Urrathon Night-Walker.[27]

Samwell and the few survivors from the fight at the Fist escape south with a heavy snow falling. Upon an undead horse, a lone Other appears. In a blind panic, Sam slays the Other by stabbing it with the dragonglass dagger given to him by Jon. The dagger causes the Other to shrink and puddle, dissolving away in twenty heartbeats. Only the dagger remains, wreathed in steam. Grenn goes to scoop up the dragonglass dagger, but has to fling it down again as it is extremely cold.[14]

Sam and Gilly, escaping from the mutiny at Craster's Keep, are menaced by a wight which was once Small Paul. Sam attempts to stab him with the dragonglass dagger, but it shatters upon contact with Paul's chainmail.[28]

Having relinquished Ice to Tywin Lannister, Ser Ilyn Payne now wields a greatsword with a chunk of dragonglass carved in the shape of a grinning skull on its pommel.[29]

At the Wall, after hearing about the properties of dragonglass from Sam, King Stannis Baratheon sends word to Ser Rolland Storm, the castellan of Dragonstone, to begin mining obsidian on the volcanic isle.[4]

In Oldtown, Leo Tyrell tells his fellow acolytes and novices of the Citadel that there is a glass candle burning in Archmaester Marwyn's chambers. Armen explains the vigil an acolyte must hold to become a maester, where one fruitlessly attempts to light one of the Citadel's glass candles, and says that obsidian does not burn. Pate remembers that the smallfolk call obsidian dragonglass, and Alleras wonders if the return of dragons is what lets the candle burn again.[1]

At the Wall, Samwell tells Jon, the new Lord Commander, that he has learned the children of the forest used to give the Night's Watch a hundred obsidian daggers every year, during the Age of Heroes.[24]

When Sam arrives at the Citadel, there is a black glass candle burning in Marwyn's study on the Isle of Ravens. Marwyn tells him that it burns but is not consumed.[8]

In Meereen, Quaithe tells Daenerys Targaryen that the glass candles are burning.[30]

Jon arms his rangers with obsidian weapons when they venture into the haunted forest.[31]

Luwin: Obsidian. Forged in the fires of the gods, far below the earth. The children of the forest hunted with that, thousands of years ago. The children worked no metal. In place of mail, they wore long shirts of woven leaves and bound their legs in bark, so they seemed to melt into the wood. In place of swords, they carried blades of obsidian.
Osha: And still do.[6]

Jeor: Is dragonglass made by dragons, as the smallfolk like to say?


Samwell: The m-maesters think not. The maesters say it comes from the fires of the earth. They call it obsidian.


Jeor: They can call it lemon pie for all I care. If it kills as you claim, I want more of it.[3]
—Jeor Mormont and Samwell Tarly

Dragonglass. Frozen fire, in the tongue of old Valyria. Small wonder it is anathema to these cold children of the Other.[4]