Old Ghis
Slaver's Bay and the location of Old Ghis 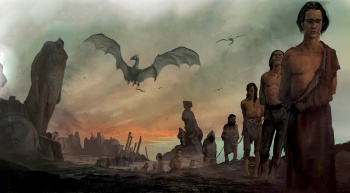 The Fall of Old Ghis by Marc Simonetti © 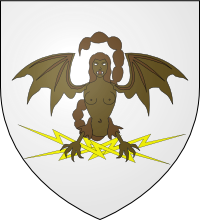 The harpy, the emblem of Ghis

Old Ghis is a ruined city in Essos. It is located in southwestern Ghiscar, east across the Gulf of Grief from the Valyrian peninsula.[2][3] It was the capital city of the Old Empire of Ghis. The ancient city was one of the oldest known cultures and nations in the world. Its founding and golden age predate that of its successor, Valyria, by thousands of years.[1][4]

The ancient city of Old Ghis had brick walls and colossal pyramids—such as the Great Pyramid—temples, and homes.[4]

Old Ghis was founded by Grazdan the Great.[5] Its emblem was a harpy, which had a woman's torso, the wings of a bat instead of arms, the legs of an eagle, and a scorpion's tail. In its claws rested a thunderbolt.[1]

In the dawn of days Old Ghis opened its gates and poured forth its lockstep legions to control Slaver's Bay and the Gulf of Grief. With their lockstep discipline and absolute obedience the Old Empire of Ghis ground nations beneath their boots, destroying that which they did not enslave.

Old Ghis was brought to ruin following a series of wars with the Valyrian Freehold.[1][5] Ghiscar fought with Valyria five times, losing each war because of Valyria's dragons. Ghis's lockstep legions were shattered in the final war five thousand years ago. The city's brick walls were pulled down, its streets and buildings were turned to ash and cinder by dragonflame, and its fields were sown with salt, sulfur, and skulls.[1]

The city of New Ghis, located on an island south of Ghaen and the Ghiscari Strait,[6] claims to be Old Ghis come again.[4]

Lomas Longstrider once visited the colossal ruins of the Great Pyramid of Ghis.[7] Dalton Greyjoy sailed to Old Ghis by the age of fourteen.[8]

Old Ghis ruled an empire when the Valyrians were still fucking sheep, and we are the sons of the harpy.[1]

Five times had Old Ghis contended with Valyria when the world was young, and five times had gone down to bleak defeat. For the Freehold had dragons, and the Empire had none.[5]