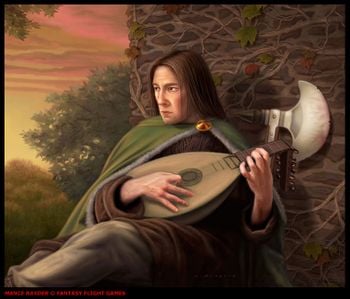 The Old Tongue is a language brought to Westeros by the First Men during their migration over twelve thousand years ago. It is a coarse language, harsh and clanging.[1] The language is all but extinct in the Seven Kingdoms, where the Common Tongue has become dominant. In the lands beyond the Wall, however, the Old Tongue is still spoken by giants[2] and most wildlings.[1]

The Old Tongue is the language spoken by the First Men of old,[3][4] the current giants,[3][5] and free folk tribes[1] such as the Thenns.[6] Only a few terms and translations are known from this language, as George R. R. Martin has not developed the actual language. On the developing of languages for A Song of Ice and Fire, Martin has explained:

... I don't have a whole imaginary language in my desk here, the way Tolkien did[7] ... Tolkien was a philologist, and an Oxford don, and could spend decades laboriously inventing Elvish in all its detail. I, alas, am only a hardworking SF and fantasy novel, and I don't have his gift for languages. That is to say, I have not actually created a Valyrian language. The best I could do was try to sketch in each of the chief tongues of my imaginary world in broad strokes, and give them each their characteristic sounds and spellings.[8]

Several names of terms and names are described in the published material:

Characters familiar with the Old Tongue