The old blind dog is an old guard dog Sansa Stark befriends when she is staying at the seat of House Baelish on the Fingers. He is aged, too sick and toothless to walk the guard with Bryen anymore. Mostly all he does is sleep but when Sansa pats him he whines and licks her hand and after that they are fast friends.[1] 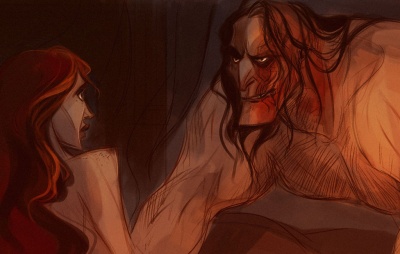 "I’ll have that song from you". © Kallielef

During her stay Sansa sits bored and restless by the fire beside the old blind dog.

The night of Petyr Baelish and Lysa Arryn's wedding Sansa goes outside the flint tower and stays there for a long time. When she goes back inside to seek her bed she finds the old blind dog in her little alcove beneath the steps, and lies down next to him. He wakes and licks her face. A drunken Marillion then approaches and attempts to have his way with Sansa. The old dog raises his head and growls but the singer gives him a cuff which sends him slinking off. Ser Lothor Brune comes to Sansa’s aid and gets rid of Marillion.

That night Sansa hardly sleeps at all. She dreams of her wedding night and Tyrion Lannister's eyes devouring her as she undressed. However, he his bigger than Tyrion has any right to be, and when he climbs into the bed his face is scarred only on one side and he rasps, "I'll have that song from you." She awakens and finds the old blind dog lying beside her once again. She says to him, "I wish that you were Lady."[1]