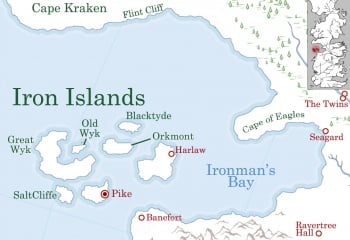 Orkmont among the Iron Islands

Orkmont is one of the islands that make up the island chain called the Iron Islands. Orkmont is centrally located, with Blacktyde to the north, Harlaw to the southeast, Pyke to the south, and Old Wyk and Great Wyk to the west.[1] 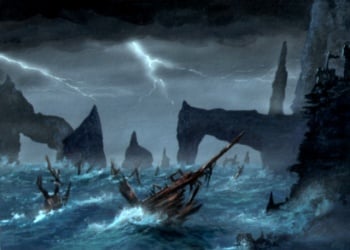 Rugged and mountainous, Orkmont is rich in ore, including iron, lead, and tin. It was once covered in forest but the timber was used extensively for shipbuilding.[2][3] Orkmont is larger and richer than Pyke.[4]

Orkmont contains the seats of House Orkwood and House Tawney.[5] The island also has a cadet branch of House Goodbrother.[6] The extinct houses Greyiron and Hoare, both of which once ruled the Iron Islands as iron kings, came from Orkmont.[7]

Urras Greyiron, the salt king of Orkmont, was crowned the first driftwood king.[8] Urron Greyiron, another salt king from Orkmont, slaughtered his rivals at the kingsmoot on Old Wyk, becoming the first hereditary iron king.[9][8]

House Orkwood of Orkmont helped to overthrow House Greyiron during the coming of the Andals to the Iron Islands.[10] During the rule of the iron kings of House Hoare, merchants and traders from Orkmont were known to call at Lannisport, Oldtown, and the Free Cities.[3]

Following the death of Harren Hoare in the burning of Harrenhal, an ironman of Orkmont declared himself king but was killed in the succession squabble.[4]

During Greyjoy's Rebellion, the forces of King Robert I Baratheon conquered Orkmont.[11] 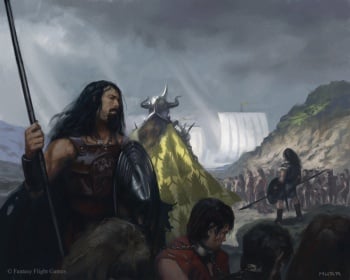 The name of Orkmont may be inspired by Orkney, an archipelago in the Northern Isles of Scotland.