Osney Kettleblack is the youngest of the Kettleblack brothers.[2] He is the son of Oswell Kettleblack and he has two brothers, Ser Osmund and Osfryd Kettleblack.

Osney is a tall man with a hooked nose and a shaven face.[3] His dark hair[3] reaches his collar.[4] Like his two brothers, he is illiterate.[5] Osmund thinks that he and Osfryd are stronger than Osney.[6]

Osney and his brothers are amiable, being popular with both knights and servants and amorous with serving women.[7] Tyrion Lannister considers all three to be deceitful and unsavory,[8] but none as dangerous as Bronn.[9]

Osney, along with his brothers Ser Osmund and Osfryd, is used by Tyrion Lannister to infiltrate Cersei Lannister's attempt to buy a force of sellswords for herself.[8]

Osney receives four scars on his cheek[4] when he is scratched by Alayaya.[3]

During the Battle of the Blackwater, Osney brings reports to Queen Regent Cersei Lannister,[7][4] and he aids Osfryd.[10] Osney informs Ser Dontos Hollard of Stannis Baratheon's defeat in the battle.[4]

Osney and Osfryd are given their knighthoods after the Battle of the Blackwater, though they took no part in the actual fighting.[11] The Kettleblacks bring Prince Tommen Baratheon back from Rosby after the death of Ser Jacelyn Bywater.[11]

All three of the Kettleblack brothers give evidence against Tyrion in his trial for the the murder of King Joffrey. Osfryd and Osney mention Tyrion's threats against Cersei, although they omit that Tyrion had done so after Alayaya was harmed.[9]

Lord Petyr Baelish reveals to Sansa that the Kettleblacks have been in his employ all along, unbeknownst to Cersei and Tyrion.[14] 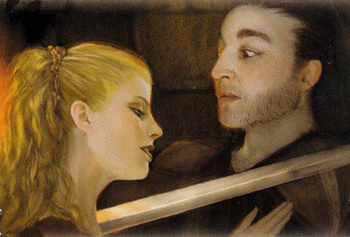 Ser Osney and his brothers are ordered by Queen Cersei to dispose of the corpse of Shae. Cersei tells them that what they do with the corpse is of no concern.[15] Ser Boros Blount and the Kettleblacks also kill two gaolers on Cersei's orders, which upsets Jaime.[16]

Osney is given a black stallion by his brother, Osfryd, which he names Midnight.[2] Osney has three scares on his face.[2]

Cersei has Osney kill the High Septon, fearing what Lancel Lannister might have told the man. Osney sneaks into the Great Sept and smothers the High Septon with a pillow while he sleeps. As a reward Cersei beds him.[5]

Cersei tasks Osney with seducing and bedding Queen Margaery Tyrell, with the pair to be discovered by Osney's brother, Ser Osmund of the Kingsguard. Tommen would then send Osney to the Wall as punishment, where he can kill the new Lord Commander of the Night's Watch, Jon Snow. Cersei promises Osney a pardon and lordship when both these tasks are completed.[2]

Cersei names Osney as the sworn shield of King Tommen I Baratheon so that the knight can be close to Margaery.[17] The young queen responds to Osney's advances with nothing but teasing,[17] however, so Cersei hatches a new scheme. She tells Osney to go the new High Septon (known as the High Sparrow) and falsely confess to bedding Margaery and two of her three cousins. Cersei then lets him bed her again to make sure he obeys.[18]

During his own torture, the Blue Bard is forced to list those he claims are Queen Margaery's secret lovers, including Osney.[18] Osney confesses to the High Sparrow, who has Margaery and her cousins arrested. The High Sparrow is suspicious, however, as he has never heard a confession from a man so pleased to be guilty. The High Sparrow then has Osney whipped to verify his confession. Under that torture, Osney tells a different story, which implicates Cersei in the death of the previous High Septon and in having sexual relations with Osney. This news allows the High Sparrow to arrest Cersei on similar charges to those of Margaery.[5] 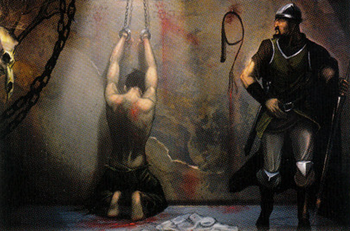 Osney remains a prisoner of the Faith of the Seven. He is to be executed for the murder of the previous High Septon.[19]

Cersei: Is that your wish, to join your brother Osmund in our Kingsguard?


Osney: I'd rather be the queen's guard, if it please Your Grace.
Cersei: You have a bold tongue, ser. You will make me forget myself again.
Osney: Good. My sweet queen.


Cersei: You are a wicked man, and no true knight, I think.[2]
—Cersei Lannister and Osney

Cersei: Bed a girl and kill a boy and I am yours. Do you have the courage?
Osney: I am your man.[2]

Usually if I lie about some woman, it's me saying how I never fucked them and them saying how I did. This ... I never lied to no High Septon before. I think you go to some hell for that. One o' the bad ones.[6]

High Sparrow: Ser Osney, did you have carnal knowledge of the queen?
Osney: Aye. That one there. She's the queen I fucked, the one sent me to kill the old High Septon.[5]

One good night for one good knight. You did valiant service, and you had your reward.[2]

Cersei: Your brother Osney. How good a sword is he?
Osmund: Good. You've seen him. He's not as strong as me nor Osfryd, but he's quick to the kill.[6]