Patchface, nicknamed Patches,[1][4] is Lord Stannis Baratheon's court fool and jester at Dragonstone. His face is tattooed in motley, earning his name.[1] His given name is unknown.

Patchface takes his name from the tattoos covering his broad face and bald head, marked in a pattern of green and red squares.[1][5] This is the fashion in the Free City of Volantis for slaves who serve as jesters.[3] The obese fool is dough-soft and slump-shouldered.[1][5]

Patchface has lost his memory and much of his wits. The fool suffers from twitches and trembles, and he is often incoherent. He has an unusual sideways walk.[1] Some consider him a simpleton.[6]

The fool wears a mock helm fashioned from an old tin bucket, with a rack of deer antlers strapped to the crown and hung with cowbells.[1] The bells ring frequently, as Patchface seldom remains still[5] and often hops back and forth.[4]

Some of Patchface's rhymes seem to be of prophetic nature, though none of his listeners understand them (see Patchface/Theories). 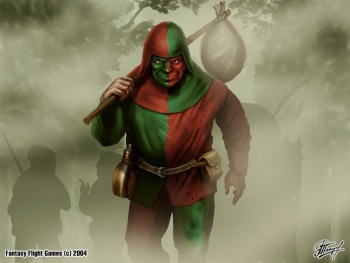 Patchface was a jester slave in Volantis. He was a clever and skilled boy with astonishing wit. His freedom was bought by Steffon Baratheon, Lord of Storm's End, who was impressed with the boy during his trip to the Free Cities. While returning to Westeros, however, Steffon's ship, Windproud, broke up in Shipbreaker Bay while his eldest sons, Robert and Stannis, watched from the parapets of Storm's End. All onboard were believed killed, including Lord Steffon, his wife Cassana, and over a hundred soldiers and sailors.[1]

Patchface washed up among the dead three days later, his naked skin white and wrinkled; Jommy swore the boy's flesh was clammy cold. The fool was taken for dead, but then he coughed up water and sat up. Patchface had survived the shipwreck, albeit broken in mind and body; the ordeal had taken his memories, and half his wit. What happened to him during the two days is unknown, but the fisherfolk like to say "a mermaid had taught him to breathe water in return for his seed." It was suggested by Ser Harbert, the castellan of Storm’s End, that it would be kindest for Cressen to let the mad boy die from milk of the poppy, but the maester refused to do so.[1]

Patchface is employed as court fool and jester at Dragonstone. He spends most of his time with Shireen Baratheon, Lord Stannis's daughter. He offers strange insights and stranger songs, sometimes touching upon what may have really happened to the boy at the bottom of the bay.[1]

Patchface accompanies Shireen Baratheon when she visits Maester Cressen in his chamber at Dragonstone to see the white raven. When Cressen arrives at the castle's feast, a dancing Patchface accidentally collides with the maester and knocks him over. Melisandre places Patchface's tin helm on Cressen's head. The maester returns the helm to the fool, but Selyse Florent commands Cressen to continue wearing it. Cressen attempts to kill Melisandre with poisoned wine, but the poison does not affect the red priestess. Cressen drinks what is left, and dies.[1]

Patchface is in attendance when Stannis Baratheon burns the statues of the Seven on Dragonstone's beach.[7]

During a small council meeting in the Red Keep, Lord Petyr Baelish suggests spreading the tale that Shireen, whose face is disfigured by greyscale, was fathered by Patchface instead of Stannis.[8] Renly Baratheon insults Stannis by mentioning the rumor during their parley at Storm's End.[9] The insinuation also casts doubt on Stannis's proclamation that the children of Queen Cersei Lannister were fathered by her brother, Ser Jaime Lannister, instead of the late King Robert I Baratheon.[10]

When Davos Seaworth returns to Dragonstone, he finds Patches playing monsters and maidens with Shireen and her cousin, Edric Storm.[4]

Patches accompanies Shireen and Selyse to Eastwatch-by-the-Sea, and Cotter Pyke writes to Jon Snow, Lord Commander of the Night's Watch, that the fool is a simpleton. Patchface receives a motley cloak of beaver pelts, sheepskins, and rabbit fur. His hat sports antlers hung with bells and long brown flaps of squirrel fur which hang down over his ears.[6]

Selyse does not introduce Patchface to Jon when the entourage arrives at Castle Black. Wun Wun is fascinated with the fool, and the giant laughs loudly after Patchface falls into a snowdrift.[6]

Patchface attends the wedding of Alys Karstark and Sigorn, and Owen the Oaf dances with him during the feast. Melisandre tells Jon that she has glimpsed the fool in her flames and considers him dangerous.[11]

When Jon announces a ranging to rescue free folk at Hardhome, Patchface enthusiastically volunteers to lead it.[12] 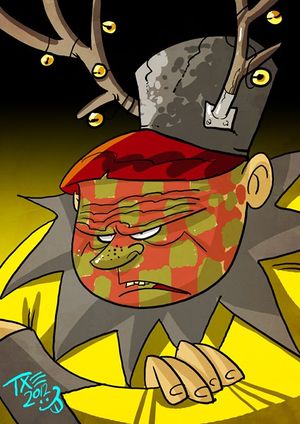 Patchface by The Mico ©

Under the sea, smoke rises in bubbles, and flames burn green and blue and black. I know, I know, oh, oh, oh.[7]

—Patchface during the burning of the Seven on Dragonstone

Under the sea the mermen feast on starfish soup, and all the serving men are crabs.[11]

Malegorn: Lord Snow, who will lead this ranging?


Jon: Are you offering yourself, ser?
Malegorn: Do I look so foolish?


Patchface: I will lead it! We will march into the sea and out again. Under the waves we will ride seahorses, and mermaids will blow seashells to announce our coming, oh, oh, oh.[12]
—Malegorn, Jon Snow, and Patchface

We have found the most splendid fool. Only a boy, yet nimble as a monkey and witty as a dozen courtiers. He juggles and riddles and does magic, and he can sing prettily in four tongues. We have bought his freedom and hope to bring him home with us. Robert will be delighted with him, and perhaps in time he will even teach Stannis how to laugh.[1]

The wretch is mad, and in pain, and no use to anyone, least of all himself. The kindest thing you could do for that one is fill his cup with the milk of the poppy. A painless sleep, and there's an end to it. He'd bless you if he had the wit for it.[1]

Davos was reminded of Patchface, Princess Shireen's lackwit fool. He had gone into the sea as well, and when he came out he was mad. Am I mad as well?[4]

That creature is dangerous. Many a time I have glimpsed him in my flames. Sometimes there are skulls about him, and his lips are red with blood.[11]