From A Wiki of Ice and Fire
(Redirected from Princess of Dragonstone)
Jump to: navigation, search 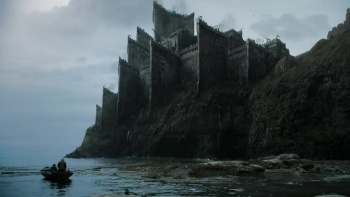 Dragonstone castle, seat of the Princes of Dragonstone

After Aegon I Targaryen conquered the Seven Kingdoms, he decided to construct a new capital city, King's Landing, in the new town growing around his newly constructed seat, the Aegonfort, which was torn down in 35 AC in preparation for the construction of the Red Keep. The seat of Dragonstone remained in possession of House Targaryen. Aegon I had two children: Aenys, born in 7 AC, and Maegor, born in 12 AC. Despite being Aegon I's eldest son and heir for many years, Aenys never held the title "Prince of Dragonstone".[N 1] Aenys was raised by Aegon I at King's Landing, and accompanied his father on royal progressions. Meanwhile Maegor was raised by his mother, Queen Visenya Targaryen, at Dragonstone and in time became known as the "Prince of Dragonstone".[1] Maegor continued to hold the title during the earlier years of Aenys's own reign. It was only in 41 AC, a year after Maegor had left the Seven Kingdoms in exile, that Aenys established "Prince of Dragonstone" as a formal title by appointing it to his own heir, Prince Aegon.[2][1]

Upon Aenys's own death, Maegor returned from exile and claimed the Iron Throne. He had three wives already, but in 47 AC, still lacking an heir, married three widowed women known to be fertile. One of these was his niece, Princess Rhaena, who had born twin girls to her late brother, Prince Aegon. Maegor named one of the girls, Aerea, as his heir until he had children of his own.[3] However, she has not been confirmed to have been appointed the title "Princess of Dragonstone".

Not every Targaryen monarch held the title "Prince of Dragonstone" before coming to the throne, such as in times when there were several deaths in rapid succession so a younger son instantly succeeded to the throne (such as Aerys I and Aegon V).

However, two children of King Aerys II still remain. Viserys Targaryen, who had been crowned on Dragonstone prior to its fall,[4] named his young sister Daenerys Targaryen, as his sole heir, the Princess of Dragonstone.[5] After Viserys' death, Daenerys declared herself Queen. She has not yet named a new heir.

From her birth until the death of her brother, Daenerys Targaryen uses the title Princess of Dragonstone, as heir of Viserys Targaryen, who is the claimant to the Iron Throne.[5]

Known Princes and Princesses of Dragonstone

Whilst Aegon II Targaryen is recorded in history as the official monarch of the Seven Kingdoms from King Viserys I's death in 129 AC until his own death in 131 AC, he is not mentioned to have declared a Prince or Princess of Dragonstone, despite having had three children and three brothers. Since during most of that time period Dragonstone was in possession of Rhaenyra Targaryen, who, as the declared heir of King Viserys I, had crowned herself Queen, it might be that Aegon II did not feel he could declare a Prince of Princess of Dragonstone until the castle was conquered. Rhaenyra, however, acknowledged several Princes of Dragonstone during this time. Dragonstone came in the possession of Aegon II in late 130 AC.[10][11] In 131 AC, at the behest of Lord Corlys Velaryon, Aegon betrothed his only remaining child, Princess Jaehaera Targaryen, to Rhaenyra's eldest surviving son, Aegon the Younger, and named them his heirs.[23][24] Whether either Jaehaera or Aegon the Younger were given the title Princess of Prince of Dragonstone after this is currently unknown.