Rakharo is a Dothraki horserider in the khalasar of Khal Drogo.

In the television adaptation Game of Thrones, Rakharo is portrayed by Elyes Gabel.[1]

Rakharo is one of four Dothraki warriors assigned to the khas of Daenerys Targaryen within the khalasar of Khal Drogo. He accompanies Daenerys during her visit to the Western Market in Vaes Dothrak, and is challenged by Quaro to a friendly sausage-eating contest. He helps stop an assassination attempt on Daenerys's life by a wineseller.[6]

When Daenerys attempts to heal Drogo with Mirri Maz Duur's aid, his bloodriders try to stop her. Haggo is killed by Rakharo's arakh in his attempt to stop Daenerys.[3]

When Daenerys names Rakharo ko and asks him to become one of her bloodriders alongside Aggo and Jhogo, she offers him the great curving[7] arakh she received as a present during her wedding. He is at first reluctant, but he accepts after the dragons are born.[8]

Rakharo serves in the Queensguard of Daenerys.[9] During their journey across the red waste, Rakharo warns Daenerys against travelling downriver to the three ports of Slaver's Bay, as Khal Pono and his khalasar had ridden that way to sell thousands of captives at the slave markets.[7]

While her khalasar rests in Vaes Tolorro after crossing the red waste, Daenerys orders her three bloodriders to scout out the country, each one in a different direction. Rakharo leaves to the south, where he finds mostly nothing but barren land and the sea. He claims he discovered the bones of a dragon so immense that he had ridden his horse through its great black jaws. Rakharo is the first bloodrider to return, and Daenerys puts him in charge of pulling up the plaza in an effort to turn it into a garden.[7]

When the khalasar arrives in Qarth, Rakharo is ordered to explore the city beyond what its leaders would have Daenerys and her entourage see.[10] Rakharo protects the rear of the procession during Daenerys's visit to the Hall of a Thousand Thrones to petition the Pureborn, and he shows contempt for Quaithe's warnings to Daenerys to leave the city.[2]

Rakharo accompanies Daenerys to the House of the Undying. He helps subdue Pyat Pree, who tries to murder Daenerys.[11] Afterwards, Rakharo is assigned by Daenerys to protect the dragons and her people while Aggo and Jhogo go with her to the port of Qarth.[12] Rakharo guards the ships while Daenerys discusses the purchase of Unsullied slaves. As one of Daenery's three bloodriders, Rakharo is often asked to keep her company as to prevent Ser Jorah Mormont from approaching her when alone.[13]

The night before the fall of Astapor, Daenerys sees him sharpen his arakh in preparation for the bloodshed. Rakharo protects the rear of the litter alongside Jhogo, and cuts down several Good Masters and Astapori slavers with his arakh on the day of the battle. He personally kills Grazdan mo Ullhor with an arrow through the mouth.[4]

On the march to Yunkai, Rakharo and his fellow bloodriders are also made kos by Daenerys and are put in charge of commanding the 30-odd mounted Khalasar remaining to her, leaving their guarding duties to Arstan Whitebeard and Strong Belwas. Rakharo later participates in the battle near Yunkai, successfully leading the Dothraki mounted warriors in wedge formation against the enemy center.[14]

During the siege of Meereen, Rakharo almost comes to blows with Aggo and Jhogo over who would fight Oznak zo Pahl, the Hero of Meereen; Daenerys ultimately stops her bloodriders from fighting, deeming them brave but too young and valuable to lose. He later expresses annoyance in Daenerys's decision to send Strong Belwas.[15]

Rakharo, Aggo, and Jhogo are commanded by Daenerys to use her khalasar to subdue the hinterlands of Meereen and end the slavery there.[16] Ser Barristan Selmy reports the bloodriders successfully harried the slavers from the hills and struck the shackles off the slaves, and are planting and bringing crops to Meereen to market.[17]

Daenerys recalls Rakharo and her other bloodriders back to Meereen. Upon their return, Daenerys notes Rakharo has grown more tall and muscular, towering over both Aggo and Jhogo, and has four new bells added to his braid. Both Irri and Jhiqui now desire him and argue over whom he would prefer, but Daenerys orders them to stop fighting over the blood of her blood.[5]

Rakharo expresses disgust at the cannibalism of the diseased refugee survivors of the fall of Astapor. He and Jhogo are shamed by Daenerys into aiding the sufferers of the bloody flux by helping them bathe in the nearby ocean.[5]

Rakharo leads a scouting party beyond the Skahazadhan, informing Daenerys of Dothraki scouts from an impending khalasar with slaves to be sold at the Yunkish slave markets outside of Meereen.[18] He later accompanies Daenerys to Daznak's Pit as part of the royal procession's guard.[19]

Rakharo and Aggo depart Meereen and lead search parties across the Skahazadhan to locate Daenerys when she disappears from Daznak's Pit on Drogon's back.[20] Both lead ten picked riders and every man has three horses each to travel far and fast to find her.[21] 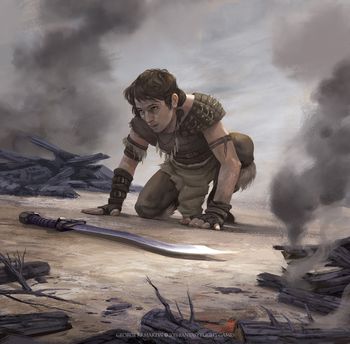 They took Khal Drogo's herds, Khaleesi. We were too few to stop them. It is the right of the strong to take from the weak.[22]

Daenerys: Rakharo, you shall have the great arakh that was my bride gift, with hilt and blade chased in gold. And you too I name my ko, and ask that you live and die as blood of my blood, riding at my side to keep me safe from harm.
Rakharo: You are khaleesi. I shall ride at your side to Vaes Dothrak beneath the Mother of Mountains, and keep you safe from harm until you take your place with the crones of the dosh khaleen. No more can I promise.[8]

Khaleesi, better a man should swallow scorpions than trust in the spawn of shadow, who dare not show their face beneath the sun. It is known.[2]

Blood of my blood, when cowards hide and burn the food and fodder, great khals must seek for braver foes.[15]

In the second season of Game of Thrones Rakharo does not return alive from his scouting in the red waste. His horse returns to Daenerys Targaryen's khalasar with his severed head in a saddlebag; presumably he was killed by another khal.[23]