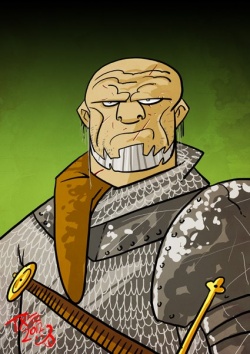 Randyll Tarly is Lord of Horn Hill and head of House Tarly. He is married to Lady Melessa Florent, and is the father of the POV character Samwell Tarly. Randyll wields the Tarly ancestral blade Heartsbane, a Valyrian steel greatsword, in battle. In the television adaptation Game of Thrones he is portrayed by James Faulkner.

Randyll is a lean and balding man with a short, bristly grey beard.[1][2] He is a narrow man but iron willed, shrewd and capable,[3] and is considered one of the finest battle commanders in Westeros.[4] Randyll prizes courage and martial ability, which causes him to despise his eldest son, Samwell because of his cowardice and softness, and strongly favor his younger son, Dickon, who is much more fierce and robust.[5]

In the field Randyll wears mail and boiled leather with a breastplate of grey steel.[6] He carries the ancestral Valyrian steel sword Heartsbane across his back in a jeweled scabbard.[2]

Randyll was married to Lady Melessa Florent. Their first-born child, Samwell, was born in 283 AC.[7] They would later have three daughters, born within three years time, and a second son, Dickon.[5]

As one of Mace Tyrell's bannermen, Randyll fought in Robert's Rebellion on the side of House Targaryen. He defeated Robert Baratheon's forces at the Battle of Ashford,[8] and cut down Lord Cafferen during the battle.[9]

A martinet, Randyll became disappointed in his gentle, timid firstborn son Samwell and made several harsh attempts to engage him in manly, martial pursuits, but all to no effect.[5] Once, he brought his son with him to the Arbor, but Samwell was mocked endlessly while there, and despite the fact that he had planned to leave his son at the Arbor as Lord Paxter Redwyne's page and squire, he brought Samwell back home with him.[10] After his wife, Melessa, gave birth to their second son, Dickon, Randyll began to ignore Samwell, leaving Samwell to his own devices until the boy turned fifteen. Lord Randyll summoned Samwell the day of his fifteenth nameday, and threatened to end Samwell's life if he did not join the Night's Watch, thereby nullifying his claim to Horn Hill, allowing Dickon to become Randyll's lawfull heir.[5]

Samwell Tarly tells Jon Snow how Randyll gave him the choice between joining the Night's Watch and death, shortly after his arrival at the Wall.[5]

When Renly Baratheon calls his banners, Randyll joins with House Tyrell in supporting Renly.[1] Randyll is hosting Renly at Horn Hill when they receive Stannis Baratheon's letter claiming that the late Robert I Baratheon's children are bastards.[11] While at the camp by Highgarden, Randyll is told by his son and heir, Dickon, of a cruel game that several of the knights are playing on Brienne of Tarth. Randyll summons Brienne and tells her that some of the men laid wagers on the first to claim her maidenhead. He then tersely advises her that women have no place on the battlefield.[6] Randyll accompanied Renly's army to Bitterbridge, where he meets Catelyn Tully when she arrives during the melee.[1]

After the parley with Stannis beneath the walls of Storm's End, Lord Randyll counsels attacking Stannis to make sure he gains no strength while Renly is away.[11] Randyll and Lord Mathis Rowan discuss tactics for the upcoming battle. Before it can take place, however, Renly is assassinated.[12] Afterwards, Randyll continues to follow the Tyrells in forsaking Stannis's cause.[13] He captures Renly's stores at Bitterbridge and puts a great many men to death, mainly those sworn to House Florent, his wife's family.[14]

Randyll is sent out with Lord Rowan to find Lord Tywin Lannister and bring him to Tumbler's Falls where Lord Mace Tyrell is waiting with a huge host and a fleet of barges.[15] Once again following the lead of his liege lord, he joins with the Lannisters and fights against Stannis, commanding the center at the Battle of the Blackwater.[16] For this, he receives a commendation for his services - although the abandoned Florent seat at Brightwater Keep is awarded to Garlan Tyrell.

Randyll destroys a northern force attacking the town of Duskendale, resulting in the capture of Harrion Karstark and Robett Glover and the death of Helman Tallhart.[17] Afterwards, he takes the town of Maidenpool with Lord Renfred Rykker, locks Lord William Mooton of Maidenpool in a tower, and secures the kingsroad.[18][19][20]

Randyll, along with Lord Mathis Rowan, is named by Ser Kevan Lannister as a good candidate for Hand of the King, but Queen Regent Cersei Lannister refuses to name a Tyrell bannerman as Hand, failing to understand that such a move would actually weaken the Tyrells by placing one of their most powerful bannermen in a position of authority higher than the Warden of the South.[4]

Randyll takes his forces and begins reconstruction of Maidenpool. His son Dickon is married to Eleanor Mooton, the daughter of the pardoned Lord William.[21] Brienne encounters Randyll again while he is dispensing harsh but fair justice in the market square. He extracts her business from her, but allows her to leave.[6] After Brienne returns with the heads of several Brave Companions, Randyll complains that he has executed many outlaws, but cannot find their leaders.[22] When word of the imprisonment of Margaery Tyrell reaches Randyll, he marches his army to King's Landing.[23] 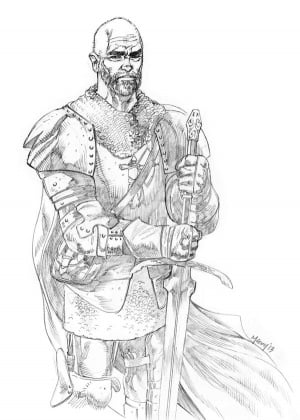 Randyll's army reaches King's Landing before his liege lord, Mace Tyrell. The Faith releases Margaery and her cousins into his custody after Lord Tarly swears a holy oath to return them for trial. To try and undo the damage Cersei did to the Tyrell and Lannister alliance, Kevan Lannister, now the Lord Regent, makes Tarly the new justiciar - and restores the title of master of laws - on King Tommen I Baratheon's small council.[24]

When news of the taking of Griffin's Roost and the landing of the Golden Company arrive to the capital, Randyll expresses doubts about the identity of Jon Connington as well as that of his Targaryen pretender, dismissing him as a "feigned boy". Ser Kevan thinks that Randyll is more dangerous than Mace Tyrell, the new Hand of the King.[3]

Randyll: No disrespect to you, Lady Stark, but it would have been more seemly had Lord Robb come to pay homage to the king himself, rather than hiding behind his mother's skirts.
Catelyn: King Robb is warring, my lord, not playing at tourney.[1]

I say that Stannis is a danger to you, leave him unblooded and he will only grow stronger, while your own power is diminished by battle. The Lannisters will not be beaten in a day. By the time you are done with them, Lord Stannis may be as strong as you ... or stronger.[11]

It takes more than a pretty cloak to charge a shield wall. I was leading Mace Tyrell's van when you were still sucking on your mother’s teat, Guyard.[11]

The gods made men to fight, and women to bear children. A woman's war is in the birthing bed.[6]

—Randyll, to Brienne of Tarth

Randyll Tarly is the finest soldier in the realm. A poor Hand for peacetime, but with Tywin dead there's no better man to finish this war.[4]

Tarly is the real danger. A narrow man, but iron-willed and shrewd, and as good a soldier as the Reach could boast.[3]