From A Wiki of Ice and Fire
Jump to: navigation, search
For others named Rhaella, see Rhaella.

Rhaella was said to have always been mindful of her duty.[4]

Rhaella was born in either 245 AC or 246 AC[1] to Prince Jaehaerys and Princess Shaera Targaryen. She had an older brother, Aerys.[5]

According to Ser Barristan Selmy, Rhaella had been in love with Ser Bonifer Hasty, a young landed knight[6] from the stormlands, during her youth. Bonifer once named her his queen of love and beauty. Their affair was a short one, however, as Bonifer was of too low birth to ever be seriously considered a suitor for Rhaella.[4] 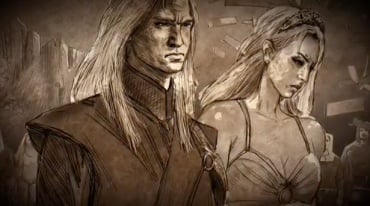 Rhaella was married at a young age to her older brother,[7] Aerys, on the command of their father, Prince Jaehaerys.[4][8][9] Jaehaerys had been influenced by a woods witch brought to court by Jenny of Oldstones. The woods witch prophesied that the prince that was promised would be born from Aerys's and Rhaella's line,[8] making Jaehaerys determined to marry his daughter to his son. King Aegon V Targaryen, whilst frustrated with his son's decision, allowed Jaehaerys to do as he wished.[9] According to Barristan, there was no fondness between Aerys and Rhaella on the day of their wedding.[8]

As a princess, and eventual queen, Rhaella had multiple ladies in waiting. At some point, they included the mother of Prince Doran Martell, and, from 259 AC to 263 AC, Lady Joanna Lannister from Casterly Rock.[10][11]

In 259 AC, whilst present at Summerhall, Rhaella gave birth to the first of her children, Prince Rhaegar Targaryen, whilst the tragedy of Summerhall raged.[12][13][14] During the tragedy, Rhaella's grandfather, King Aegon V Targaryen, died, leading to her own father, ascending the throne as Jaehaerys II Targaryen.[15] Following Jaehaerys's own death, in 262 AC, Rhaella's brother and husband ascended the throne as King Aerys II Targaryen, and Rhaella became queen.[16] 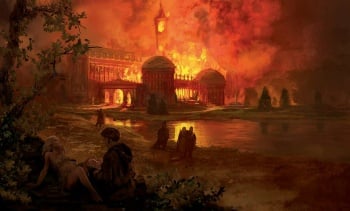 Rhaella giving birth to Prince Rhaegar as Summerhall burns down.

While at first, her brother comforted Rhaella in her grief, the multiple stillbirths, miscarriages and dead children eventually caused Aerys to become suspicious. He accused her of having been unfaithful, and claimed that the dead children had been bastards. Rhaella was confined to Maegor's Holdfast (roughly around 270 AC), and Aerys decreed that two septas would sleep in Rhaella's bed every night, to ensure she would remain faithful.[11]

The death of Prince Jaehaerys in 274 AC shifted Aerys' suspicions to others. He first blamed Jaehaerys's wet nurse, and had her beheaded in a black rage. He later became convinced that Jaehaerys had been poisoned by his mistress, and had the girl and her family tortured to death.[11] Aerys then fasted for a fortnight, made a walk of repentance across the city to the Great Sept of Baelor, and prayed with the High Septon. Upon his return, he declared that he would only sleep with Rhaella, his wife, from that day forth. As far as is known, Aerys remained true to this vow, no longer taking any mistress from 275 AC forth.[11]

In 276 AC, Rhaella gave birth to Prince Viserys. While he was small and robust, he was healthy. However, Aerys feared that Viserys would die like his brothers, and so tasked the Kingsguard to watch over the infant. Even Rhaella was forbidden to be alone with her son. Aerys insisted that his food taster suckle at the breasts of the wet nurse, to be certain that there was no poison on her nipples.[11] When Lord Tywin Lannister, Hand of the King, held a tournament in honor of Viserys's birth at Lannisport, Rhaella was ordered to remain at King's Landing with Viserys.[11] In 281 AC, during the tourney at Harrenhal, Rhaella again remained in the capital with Viserys.[17][18]

In the later years of the marriage of Aerys and Rhaella, the Mad King's insanity set in. According to Ser Barristan Selmy, Rhaella did her best to protect Viserys from the worst of Aerys's excesses, keeping her child oblivious to the fact his father was sliding deeper into madness.[19] According to Ser Jaime Lannister, Rhaella's eyes had been closed for years by the time Aerys ordered caches of wildfire be placed all over King's Landing.[20]

Aerys grew sexually abusive toward Rhaella, developing a sexual fetish for fire and death and only sleeping with Rhaella after he had executed someone by burning. The last time was during Robert's Rebellion after Aerys burned his then-Hand, Lord Qarlton Chelsted, for opposing the Mad King's wildfire plot. Jaime recalls listening outside Rhaella's bedchamber as she cried as the king raped her; when Jaime protested that the Kingsguard were sworn to defend the queen as well, his sworn brother Ser Jonothor Darry replied, "We are, but not from him". The queen's maids reported seeing scratches, bruises and bite marks all over her body.[21] 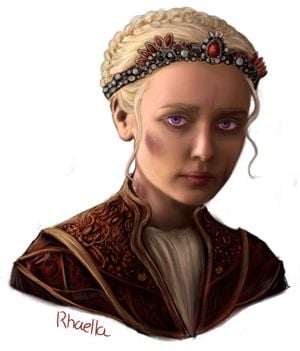 Soon after the burning of Lord Chelsted,[22] King's Landing was informed of the death of Rhaegar at the hands of Lord Robert Baratheon during the Battle of the Trident. Aerys evacuated Queen Rhaella, who was in the early stages of pregnancy, and Prince Viserys to Dragonstone[20] along with the Red Keep's master-at-arms, Ser Willem Darry.[23] Ser Jaime Lannister remembers Rhaella traveling to her ship in the morning,[21] while Viserys speaks of a midnight flight to Dragonstone.[3]

Remaining in the capital, Aerys and Rhaegar's family were killed during the Sack of King's Landing. Dragonstone became the last haven of the remaining Targaryens.[3]

With Aerys, Rhaegar, and Rhaegar's son Aegon dead, Rhaella crowned Viserys at Dragonstone,[2] although the Great Houses instead recognized Robert I Baratheon as the new Lord of the Seven Kingdoms.

Rhaella spent the duration of her pregnancy on Dragonstone. Nine moons after sailing from King's Landing Rhaella gave birth to her only daughter, whom she named Daenerys,[24] while a raging summer storm threatened to rip the island fastness apart. Rhaella died shortly thereafter from complications of childbirth.[3]

Prior to Stannis Baratheon's assault on Dragonstone, Willem Darry fled from Dragonstone with Rhaella's surviving children, Viserys and Daenerys Stormborn, for the Free Cities.[3] Later, with the exiled siblings living in poverty, Viserys sold Rhaella's crown to survive.[25]

When Viserys sold their mother's crown, the last joy had gone from him, leaving only rage.[26]

Whenever Aerys gave a man to the flames, Queen Rhaella would have a visitor in the night.[21]

The queen your mother was always mindful of her duty.[4]