From A Wiki of Ice and Fire
Jump to: navigation, search
Not to be confused with Rhaella Targaryen.

Princess Rhaelle Targaryen was the youngest child of King Aegon V Targaryen and Queen Betha Blackwood. She was married to Lord Ormund Baratheon of Storm's End.[2]

In 237 AC, Rhaelle's four elder siblings had been betrothed: Prince Duncan to the daughter of Lord Lyonel Baratheon, Prince Jaehaerys to Celia Tully, Princess Shaera to Luthor Tyrell, and Prince Daeron to Olenna Redwyne. It was Rhaelle's eldest brother, Duncan, who broke his betrothal first, by marrying Jenny of Oldstones in 239 AC. This greatly angered Lord Lyonel, who rebelled against his king. A trial by combat, and the word of King Aegon V ended Lord Lyonel's rebellion, with an end result a betrothal, of Rhaelle to Lord Lyonel's son and heir, Ormund Baratheon.[2]

To seal the bargain, Rhaelle was sent to Storm's End, where she would serve as a cupbearer, and be a companion to Lord Lyonel's wife.[2] In 245 AC, the promise of King Aegon V was fulfilled, and Rhaelle and Ormund were wed. Their son, Steffon, was born the next year.[3]

Rhaelle's marriage to Ormund would eventually be part of the end of the rule of House Targaryen. Rhaelle's grandchildren through Steffon would be Robert, Stannis and Renly Baratheon.[4] It would be young Lord Robert, who would eventually lead the rebellion against Rhaelle's nephew, King Aerys II Targaryen.

Thus, through Rhaelle, Robert Baratheon descended from King Aegon V Targaryen and thus had a blood claim to the Iron Throne, which the maesters used to justify the outcome of Robert's Rebellion.[5] 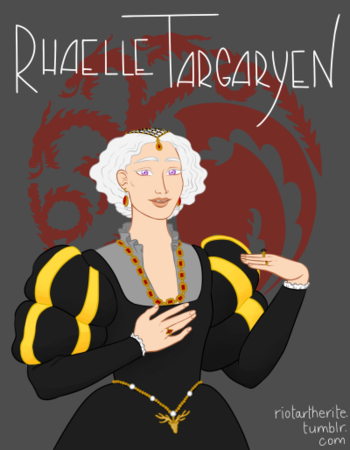