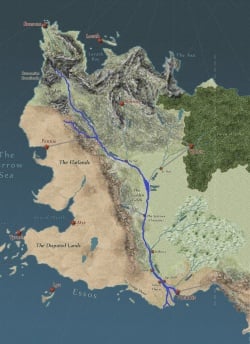 Flow of the Rhoyne in western Essos

The Rhoyne is one of the main rivers of the eastern continent, Essos.

See also: Images of the Rhoyne

The Rhoyne originates from the confluence of two of its tributaries, the Upper Rhoyne and the Little Rhoyne, southeast of the ruins of Ghoyan Drohe in northwestern Essos. Its course runs southeast and meets the Noyne just north of Ny Sar. The Rhoyne continues southeast to Dagger Lake, where it is joined by the Qhoyne. After Dagger Lake, the Rhoyne runs south, with the Golden Fields along its western bank. The Rhoyne continues south, with the Lhorulu flowing into it at the Sorrows and the Selhoru connecting at Selhorys.[1]

It is said the southern Rhoyne becomes so wide that someone in its center cannot see its shores.[2] The Volaena reaches the Rhoyne just north of Volantis. A giant delta forms at its mouth, upon which Volantis sits along the Summer Sea.[3][1] The Long Bridge crosses the Rhoyne in Volantis.

The Rhoyne is known for its river pirates, who hide on and around the many islands of Dagger Lake.[4] Timber from the Forest of Qohor is shipped downriver, since the cities and towns of the southern Rhoyne have depleted many of their forests.[5] Giant turtles known as the Old Men of the River live in the Rhoyne.[2]

During the Long Night, the Rhoyne may have frozen as far south as its confluence with the Selhoru.[6]

The watershed of the Rhoyne was the homeland of the Rhoynar, an iron-working people who founded several city-states along its banks.[7] The hills and forests contained savage peoples, but the powerful Rhoynar ensured peace along the river and its tributaries.[8]

After conquering the Old Empire of Ghis, the Valyrian Freehold began expanding west and founded their first colony, Volantis, at the mouth of the Rhoyne. The Rhoynar served as a buffer against Valyrian expansion to the northwest, however, so the Valyrians instead pressured the Andals to the west.[9]

The Rhoynar wielded water magic during the later Rhoynish Wars, but they were overwhelmed by the dragonlords of Valyria. Queen Nymeria led the surviving Rhoynar in ten thousand ships from their homeland to Dorne in southern Westeros, and the Rhoynar cities fell into ruin. Nymeria wed Lord Mors Martell in Dorne, forming House Nymeros Martell. Their new seat, Sunspear, was named after the spear of the Martells and the sun of the Rhoyne.[10]

There are few Rhoynar remaining along the Rhoyne's banks. Among them the river holds a god-like status, and in their faith it is called "Mother Rhoyne".[11]

During the Century of Blood after the Doom of Valyria, Norvos and Qohor used fire galleys at Dagger Lake to end Volantene control over the northern Rhoyne.[2] The Rhoyne south of the Sorrows is still patrolled by Volantene galleys,[2] while the headwaters of the Rhoyne are dominated by Great Norvos[12] and Qohor controls the river north of Ar Noy. The waters between Ar Noy and the Sorrows have been left to pirates.[2]

Tyrion Lannister, Jon Connington, Aegon Targaryen, and their companions sail on the Shy Maid from Ghoyan Drohe toward Volantis.[13][2][14] Tyrion is abducted by Ser Jorah Mormont at Selhorys,[15] however, and they board the Selaesori Qhoran at Volantis.[16] Quentyn Martell[17] and Victarion Greyjoy[18] also stop at Volantis during their journeys toward Meereen. The Golden Company sails from Volon Therys[19] for Westeros.

She is the greatest river in the world.[2]

Mother Rhoyne waxes so wide that a man upon a boat in the center of the stream cannot see a shore to either side.[2]