From A Wiki of Ice and Fire
Jump to: navigation, search
Not to be confused with Riot of King's Landing (Dance of the Dragons).

The riot is caused by lack of food and a sense of dissatisfaction among the general populace during the prepartion of Tyrion Lannister, acting Hand of the King, for the eventual assault on King's Landing by Stannis Baratheon, a claimant to the Iron Throne. With Lord Mace Tyrell cutting off supplies from the Reach coming up the roseroad, and the riverlands awash in blood, King's Landing is supplied mainly by House Rosby and House Stokeworth, whose lands have been largely untouched by the war. This leads to shortages in most basic foods, and most of the incoming provisions are allocated to the Red Keep and the garrison. A baker is killed in his oven for allegedly charging too much for his bread.[7]

Already incensed with King Joffrey I Baratheon's brand of justice, King's Landing is in a vengeful mood when the lords and ladies ride from the Red Keep to the harbor to see Princess Myrcella Baratheon off to Dorne.[6] The City Watch of King's Landing guard the narrow streets, and Bronn distributes a score of his sellswords in the crowd to prevent trouble.[6]

On the way back to the castle, as the royal party rides up the Hook at the foot of Aegon's High Hill, a woman walks out of the crowd with a dead baby and blocks the way. Sansa Stark encourages King Joffrey to win the people by giving the woman some money, so he throws a silver stag. The mother ignores the coin, however, and men in the crowd fight over it. When Queen Regent Cersei Lannister advises Joffrey to leave the woman, the mother begins cursing at the queen. Someone throws dung at the king, hitting him squarely in the face. Incensed, Joffrey sends Sandor Clegane after the unseen culprit, who may have been on a roof. When Joffrey orders the Hound to cut through the crowd, they angrily shout curses at the party, further inflaming the situation. Some call out the names of Robb Stark, Stannis Baratheon, and Renly Baratheon, Joffrey's rivals in the War of the Five Kings. Many in the crowd call out for bread.[6] 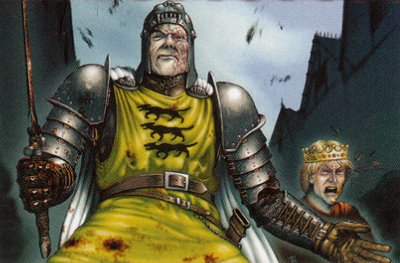 Cersei gives approval for the party to rush back to the Red Keep, so Ser Jacelyn Bywater, Commander of the City Watch of King's Landing, leads forward a wedge of gold cloaks. Ser Mandon Moore cuts off the hand of someone who touches Joffrey's leg. Ser Aron Santagar is pulled from his saddle, Ser Balon Swann fights his way forward, and the unhorsed Sandor disappears in the crowd. Joffrey rides over someone and gallops to the castle with Mandon by his side, the knight having abandoned Sansa to protect the king. Lollys Stokeworth, knocked from her saddle, is left behind. Ser Preston Greenfield rides to aid the High Septon after his litter is overturned.[6]

Once they reach the safety of the Red Keep, Tyrion kicks King Joffrey. Cersei orders Ser Boros Blount and Ser Meryn Trant to search for Sansa, but the girl is soon returned to the castle by a wounded Sandor, who chopped off the arm of a man who tried to pull Sansa from her saddle. Sandor reports that Aron was killed in the mob.[6]

Flea Bottom is set afire, so Tyrion sends Bronn to protect the water wagons. Tyrion fears that the fire will reach Guildhall of the Alchemists and its stock of wildfire. Sandor departs to find his horse, Stranger. Mandon, Meryn, and Boros are sent out with heralds to announce a curfew; anyone found in the streets after dark is to be killed.[6] At the Tower of the Hand, Tyrion orders Shagga to protect Shae at her manse near the Iron Gate.[6]

By evenfall, Bronn reports to Tyrion the fires have been quenched and most of the mobs dispersed, although King's Landing is still in unrest. Jacelyn reports that the High Septon was found torn apart, his crystal crown stolen. Aron had his head crushed, and Preston was stabbed and hacked to death. Lollys is found naked on Sowbelly Row after having been raped multiple times behind a tanner's shop. Tyrek Lannister has disappeared.[6] A goldsmith is killed for having a full larder while the city starves, and his manse is burned down.[8] Jacelyn reports that nine gold cloaks were killed and two score wounded; no accounting of slain rioters is made.[6] 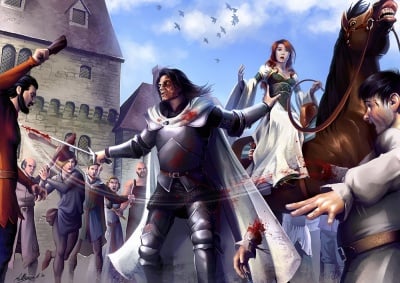 The small council extends the curfew, bringing more peace to King's Landing.[8] Food remains scarce, however, and the price of new seafood soars.[9] Ser Jacelyn Bywater is unsure of the discipline and loyalty of the gold cloaks under his command, and he reveals to Tyrion Lannister that the smallfolk mostly blame Tyrion, the Hand of the King, for the city's troubles instead of young King Joffrey I Baratheon.[6] Tyrion has a new High Septon named, and Ser Balon Swann fills Ser Preston Greenfield's place in the Kingsguard.[9]

Sansa Stark has nightmares of the riot.[10] Queen Regent Cersei Lannister plans for Prince Tommen Baratheon to be discretely moved to Rosby for his own safety.[8] Tyrek Lannister remains missing, despite the efforts of Jacelyn, Lord Varys, and Ser Addam Marbrand to find him.[11] Ser Jaime Lannister notes that Varys was not present to see Princess Myrcella Baratheon off to Dorne, thereby avoiding the riot, and he wonders if Varys had agents abduct Tyrek because the youth had squired for King Robert I Baratheon.[1]

While Lord Petyr Baelish meets with the Tyrells in Highgarden, Petyr's men spread tales of the mob killing Preston and raping Lollys Stokeworth, a way to discretely encourage Ser Loras Tyrell to join the Kingsguard and thereby defend his sister, Margaery Tyrell, who is betrothed to Joffrey.[12] Lollys eventually has a son who is named Tyrion Tanner.[5]

After becoming Hand, Lord Tywin Lannister replaces the stolen and smashed crystal crown of the High Septon with an even grander one of crystal and spun gold.[13]

During Tyrion's trial for Joffrey's death, Balon verifies that Tyrion had kicked Joffrey on the day of the riot.[14]

The night before her walk of atonement through the streets of the capital, a fearful Cersei recalls the bread riots.[4]

The unshaven and the unwashed stared at the riders with dull resentment from behind the line of spears. I like this not one speck, Tyrion thought.[6]

Joffrey: They were traitors. They called me names and attacked me!
Tyrion: You set your dog on them! What did you imagine they would do, bend the knee meekly while the Hound lopped off some limbs? You spoiled witless little boy, you've killed Clegane and gods know how many more, and yet you come through unscratched. Damn you![6]

—Joffrey I Baratheon and Tyrion Lannister

The eunuch had agents and informers all over the city. It would have been a simple matter for him to arrange to have Tyrek snatched during the confusion . . . provided he knew beforehand that the mob was like to riot. And Varys knew all, or so he would have us believe. Yet he gave Cersei no warning of that riot.[1]