Ser Rolly Duckfield, also known as Duck, is a knight in service to Young Griff.

Duck is a brawny man with a shaggy beard and a shock of orange hair.[1]

Rolly was born in the Reach. His father was a blacksmith at Bitterbridge in service to old Lord Caswell. Rolly's strength and skill with a blade earned him a place in the castle garrison, but Rolly had dreams of knighthood. He resented seeing Lord Caswell's weakling son Lorent become a page, a squire, then a knight. Lord Caswell had only one son so no one in the castle was allowed to say a word against Lorent. In the yard the other squires barely touched him.[1]

On his sixteenth name day, Rolly's father made a longsword for Rolly as a present, but Lorent Caswell saw it and claimed it for his own, saying to Rolly that he was only fit to wield a hammer, not a sword. This caused Rolly to fetch a hammer and break both Lorent's arms and half his ribs. Rolly then fled across the narrow sea to escape Lord Caswell's wrath. He joined the Golden Company as an apprentice smith for a few years, and then served Ser Harry Strickland as a squire.[1]

When Griff needed someone to train his son Young Griff in skill at arms, Harry Strickland sent him Rolly. A year later Rolly was knighted by Griff. Having no surname, Rolly choose the name Duckfield because he was in a field with some ducks when he was knighted, earning him the nickname "Duck".[1] 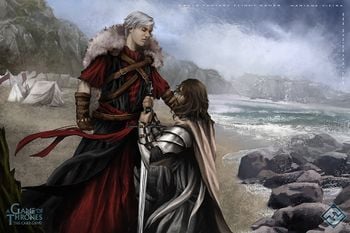 Rolly meets Illyrio Mopatis's litter and escorts Tyrion Lannister to meet the rest of the party. They set sail on the Shy Maid to Volantis.[1] Young Griff is revealed to be Aegon Targaryen, and Griff to be Jon Connington,[3] and they are supported by the Golden Company.[4]

Duck and Jon participate in the landing of the Golden Company in the stormlands. Duck is named to the new Kingsguard by Aegon, but Jon does not approve of the choice. He thinks Duck is a solid man and true, but not worthy of the Kingsguard, and that they should be reserving positions for famous warriors and younger sons of great lords whose support they will need in the fight for the throne. However, Aegon feels that it is most important that Rolly will die for him, citing the Kingslayer, Ser Jaime Lannister, as an example that matches Jon's preferences.[5] 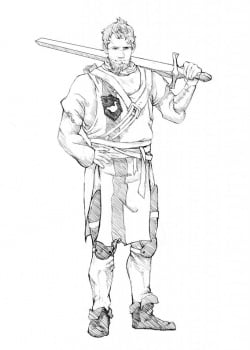 Tyrion: Are these two known to you, magister? They look like outlaws. Should I find my axe?


Rolly: Your axe? Did you hear that, Haldon? The little man wants to fight with us!
Haldon: Small men oft feel a need to prove their courage with unseemly boasts. I doubt if he could kill a duck.
Tyrion: Fetch the duck.
Haldon: If you insist.
Rolly: I'm Duck, you mouthy little pisspot.
Tyrion: I had a smaller duck in mind.
Rolly: Did you hear, Haldon? He wants a smaller Duck!


Haldon: I should gladly settle for a quieter one.[1]
—Tyrion Lannister, Haldon, and Rolly

Haldon: Tell our little friend how you came by your name, why don't you?
Rolly: A knight needs more than just the one name, and, well, we were in a field when he dubbed me, and I looked up and saw these ducks, so ... don't laugh, now.[1]

Duck will die for me if need be, and that's all I require in my Kingsguard.[5]

At least I convinced him to leave the other six slots open, else Duck might have six ducklings trailing after him, each more blindingly adequate than the last.[5]