From A Wiki of Ice and Fire
Jump to: navigation, search
For the noble house of the Reach, see House Rowan. For its founder see, Rowan Gold-Tree.

Rowan is a spearwife of the free folk.

Rowan is tall and skinny, too lean and leathery to be called pretty. She has long legs and red-brown hair.[1] 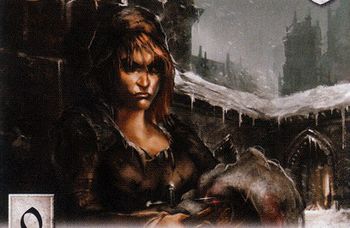 Rowan accompanies Mance Rayder and five other spearwives to Winterfell on a mission to free "Arya Stark" (actually Jeyne Poole), who is to wed Ramsay Bolton. Mance disguises himself as "Abel", a singer,[2] and the six spearwives pretend to be his mother, wife, two daughters, and two sisters, who perform the instruments with him. Abel and the spearwives play at the wedding feast.[2] Rowan is the first of the washerwomen to contact Theon Greyjoy about how he took Winterfell.[1]

After several men-at-arms and squires are found dead at Winterfell, Theon disbelieves the spearwives' claims of innocence.[3][4] Rowan explains that Yellow Dick stank and was a pig of a man, but denies responsibility for the murder of Little Walder Frey.[4] The spearwives enlist the help of a reluctant and fearful Theon in freeing Jeyne.[3][4] The six spearwives, disguised as maids and accompanied by Theon, walk into Jeyne's room under the pretext of bringing hot water so Jeyne can have a bath. As they fight their way out of the castle, Rowan and the other spearwives are taken down one by one by the Bolton men.[4]

According to a letter received by Jon Snow at Castle Black, Ramsay has captured Mance and has him wearing as a cloak made from the skins of the six women who accompanied him to Winterfell.[5]

Did the Bastard hurt you? Chopped off your fingers, did he? Skinned your widdle toes? Knocked your teeth out? Poor lad. There will be no more o' that, I promise. You prayed, and the gods sent us. You want to die as Theon? We'll give you that. A nice quick death, 'twill hardly hurt at all.[3]

Theon: Winter is coming ...
Rowan: You have no right to mouth Lord Eddard's words. Not you. Not ever.[4]