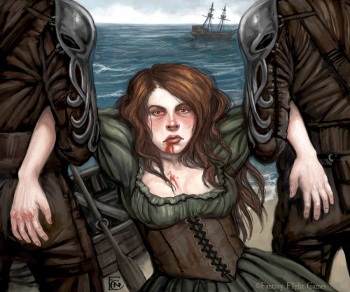 In Ironborn culture, a salt wife is a concubine. They are the women kidnapped by the ironmen during raids. An ironborn may keep several salt wives, but only one ironborn "rock wife".[1] Salt wives are bound to their captors in a religious ceremony, though it is considered a lesser ceremony than that of their rock wife. The number of salt wives kept by an ironman is a symbol of status and virility.[2]

Unlike Dornish paramours, salt wives have a low status in the society of the Iron Islands, on the same level of thralls. They are not, however, considered whores or slaves, and their sons can even inherit property or lands in lieu of trueborn heirs born of a man's rock wife. One example is of Lord Toron Greyjoy, the salt son of Lord Dalton Greyjoy, who died without having taken a rock wife; however, a war of succession ensued in the Iron Islands on his father's demise.[3]

Houses descended from salt wives, such as the Codds and Humbles, are looked down by the members of older ironborn houses.[4][5]

Once I might have carried you home as a prize, and kept you to wife whether you willed it or no. The ironmen of old did such things. A man had his rock wife, his true bride, ironborn like himself, but he had his salt wives too, women captured on raids.[6]

The Lyseni would have made whores of you, but we have saved you. Now you need only serve one man instead of many. Those who please their captains may be taken as salt wives, an honourable station.[7]

—Victarion Greyjoy, to the girls captured from the Willing Maiden