Samantha Stokeworth was a member of House Stokeworth in the reigns of kings Aenys I,[1] Maegor I, and Jaehaerys I Targaryen.[2]

Samantha was big and boisterous. She liked to boast that she had never been sick a day in her life.[3] 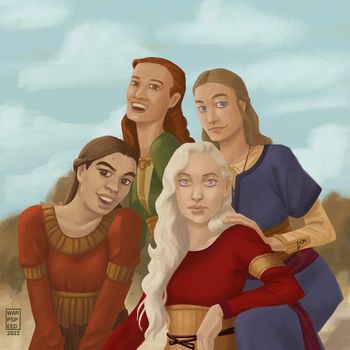 Samantha was the daughter of Lord Alyn Stokeworth of Stokeworth, who was Hand of the King at the end of King Aegon I Targaryen's reign, and at the beginning of the reign of his successor, King Aenys I. At court, she became a favorite of Princess Rhaena Targaryen.[1]

Samantha arrived on Fair Isle at the beginning of 49 AC for Rhaena's wedding to Androw Farman.[2] She stayed with the princess at Faircastle, where she, Rhaena, Alayne Royce, and Elissa Farman became nigh inseparable and often rode Rhaena's dragon Dreamfyre together. Ser Franklyn Farman dubbed the four friends as, "the Four-Headed Beast".[4]

When Rhaena left Fair Isle upon the ascension of Lord Franklyn, Samantha came with her. At Casterly Rock, she was asked by a castle septa if the marriage between Princess Rhaena and Androw had ever been consummated. Samantha was later part of Rhaena's court on Dragonstone.[4]

Samantha died at the end of 54 AC. At first, it was thought she had died of an illness. Later, it was revealed that she had been poisoned by Androw Farman, who was jealous of Rhaena's friendships with her ladies and weary of their mockery toward him.[3]