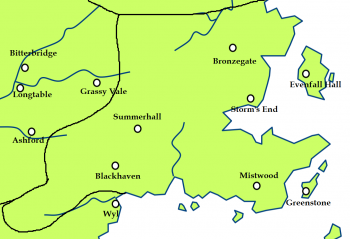 The Sea of Dorne[1] or sea of Dorne[2] is a large sea along the southeastern coast of Westeros. It is bordered to the north by Cape Wrath in the stormlands, to the west and south by Dorne, and to the east by the narrow sea.[3] The rivers Wyl and Slayne flow into the sea,[4] which has deep blue waters.[5] Another river whose name is unknown enters the Sea of Dorne near Yronwood.[4]

Ghost Hill and the Tor are prominent Dornish castles on the southern shore of the sea, while Wyl and Yronwood are situated on the western shore along the Red Mountains. Located on the northern coast in the stormlands is the castle of Stonehelm.[4] Cape Wrath also has towns like the Weeping Town and fishing villages.[6][7]

Within the sea sits an old castle on a rock, Ghaston Grey, which is used as a prison for criminals by House Martell.[1]

Some maesters, such as Cassander, believe the Sea of Dorne was once a smaller inland sea separated from the narrow sea by salt marshes, and that the narrow sea eventually flooded into this once-freshwater sea through the Song of the Sea.[8]

The Storm Kings of old sometimes kept war fleets at the towns and village situated on the northern shore of the sea.[7]

During the First Dornish War, a pirate king from the Stepstones transported Dornish raiders across the sea to attack Cape Wrath and the rainwood.[9]

King Jaehaerys I Targaryen and his sons, Princes Aemon and Baelon, used their dragons to destroy the fleet of Morion Martell, Prince of Dorne, as it crossed the Sea of Dorne in the Fourth Dornish War.[10]

Princess Arianne Martell sails across the Sea of Dorne from Ghost Hill[5] to the Weeping Town aboard the Peregrine.[11] It is reported that strange sails have been seen entering the sea and landing on Cape Wrath.[5]