From A Wiki of Ice and Fire
Jump to: navigation, search
For other uses, see Shadow.

The Shadow Lands,[1] also called the Shadow,[2] is a mountainous area in the far east of Essos.

The city of Asshai is located at the southwestern tip of the Shadow Lands. To the north and northeast, the Shadow Lands meet the Mountains of the Morn. Leng and the Manticore Isles lie in the Jade Sea to the west. South of the Shadow are the Saffron Straits, Ulos, and Ulthos.[3] The river Ash travels from the Mountains of the Morn to the Jade Sea, mostly through the Vale of Shadows, a valley so narrow with such high cliffs that is said to be always in shadow except at noon.[4][5]

Ghost grass grows throughout the Shadow Lands.[1] It is said that demons and dragons are among the creatures dwelling in cliff caves in the mountains. The ruined corpse city of Stygai, which even shadowbinders fear, lies at the heart of the Shadow.[4] 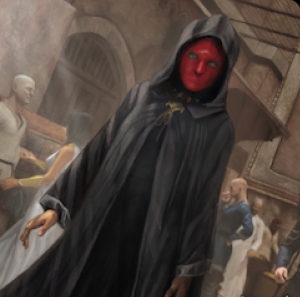 Quaithe of the Shadow, by Glen Osterberger © Fantasy Flight Games

Shadow Men, the people of the Shadow Lands, are known for covering their bodies in tattoos and wearing red lacquer wooden masks.[6]

Ancient tales from Asshai claim that dragons originated in the Shadow and were first tamed by a people so ancient they had no name.[7]

The maroon emperors of Yi Ti kept their court in Jinqi to better guard the borders of the Golden Empire from reavers from the Shadow Lands.[8]

While studying in Asshai, Mirri Maz Duur learned from a bloodmage from the Shadow Lands.[9]

Daenerys meets Quaithe of the Shadow.[2]

During the kingsmoot, Euron Greyjoy claims to have visited Asshai by the Shadow.[12]

Euron: Only one living kraken has never known defeat. Only one has never bent his knee. Only one has sailed to Asshai by the Shadow, and seen wonders and terrors beyond imagining ...
Qarl: If you liked the Shadow so well, go back there.[12]