A shadowcat, by Kevin Catalan ©

Shadowcats are large felines found throughout Westeros, including the lands beyond the Wall,[1] the Mountains of the Moon,[2][3][4] the northern riverlands,[5] and the Red Mountains of Dorne.[6]

There is also a constellation of stars named the Shadowcat.[7]

Shadowcats have thick black fur with white stripes.[3][8][9] In size, they are somewhere in between real world tigers and mountain lions.[10] Their claws are known to be very sharp;[11] a shadowcat can disembowel a man with one paw.[12] Shadowcats have sharp curved front teeth and a lashing tail.[12] Shadowcats have deep, rumbling growls[3][1] and furious screams.[13] Their eyes appear to glow at night.[13] Shadowskin,[3] the pelts of shadowcats, are prized[12] as warm and thick fur cloaks.[14]

Shadowcats are fearsome predators, and also scavenge.[3][1][15] Silent and agile hunters, it is said that shadowcats can smell blood six miles away. They will eat every shred of meat from a kill, and will crack bones to get at marrow.[1] Shadowcats tend to not attack living men unless starved.[13][16] 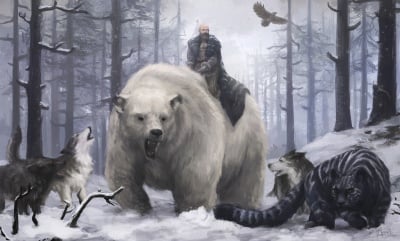 Varamyr Sixskins with his shadowcat, shadowskin cloak, and other animals, by Elena María Vacas

Some believe that in ancient days, the children of the forest resided in "tree towns" high above the ground to avoid predators such as shadowcats, which their stone weapons and greenseers were not proof against.[17]

Matteno Orthys was a Lyseni who was a fervent worshipper of the cat-goddess Pantera and kept a prized shadowcat. In 135 AC, during the bloody power struggle in Lys after the downfall of the Rogare family, his shadowcat's cage was unaccountably left open one night, and the cat mauled and partly devoured Matteno.[18]

Briar was a free folk skinchanger who controlled a shadowcat and inspired Varamyr Sixskins to control his own shadowcat, along with several other animals.[9] The shadowcat fought Varaymyr wildly before being subdued.[19] He then used his shadowcat to stalk women he wished to have sex with, forcing them to come to him.[19] Varamyr wears a shadowskin cloak.[12]

When Mance Rayder was still a member of the Night's Watch, he and his brothers once hunted an elk, and the smell of blood attracted a shadowcat. The shadowcat attacked Mance, shredding his cloak, his arm, and his back. The Watch brought him to a local wildling village where a wisewoman's daughter healed him, and sewed up the tears in his cloak with red silk from Asshai. After Mance returned to the Wall, Ser Denys Mallister told him to burn his old cloak and replace it with an entirely black one. This infringement of his freedom caused Mance to abandon the Night's Watch.[15]

A shadowcat in the snow, by Veronica V. Jones © Fantasy Flight Games

While riding along the Trident, Joffrey Baratheon and Sansa Stark track a shadowcat to its lair.[5]

Along the high road in the Mountains of the Moon, Catelyn Stark and her party (including the captive Tyrion Lannister) are worried about the shadowcats that live in the passes.[2][3] The party is attacked by Vale mountain clansmen, led by a man wearing a shadowskin cloak.[3] After the battle with the clansmen, the survivors leave the corpses to be scavenged by shadowcats, despite Catelyn's objections.[3]

The singer Marillion somehow acquires the dead chief's shadowskin cloak,[3] but Tyrion wins the cloak from him at dice.[20] In the sky cells of the Eyrie, the gaoler Mord takes the cloak from Tyrion; but once Tyrion wins his freedom through trial by combat, he takes it back.[14] Tyrion wears it for warmth while in the mountains after he leaves the Eyrie.[21]

When Tyrion arrives in King's Landing to take the role of acting Hand of the King, he is still wearing his shadowskin cloak.[8] He wears it for warmth in the underground vaults of the Guildhall of the Alchemists.[22]

While making his way through the Skirling Pass with Qhorin Halfhand, Dalbridge, Ebben, and Stonesnake, Jon Snow watches a shadowcat stalk a ram.[1] After Jon and Stonesnake kill two wildlings and capture Ygritte, the bodies of the slain are left for shadowcats to eat.[1] Jon thinks a shadowcat would be a threat to his direwolf, Ghost.[13] A half-starved shadowcat comes snarling from its lair and spooks Stonesnake's horse; she breaks a leg, and the rangers have to kill her. Ghost eats most of the horse, the men take some of the meat and leave the rest for the shadowcats.[16] Later, Qhorin and Jon hide in a cave behind a waterfall. Qhorin tells Jon that when he was young, a brother of the Night's Watch told him how he had followed a shadowcat through the falls.[16]

From the top of the Wall, looking down into the wildlings' camp with Maester Aemon's Myrish eye, Jon sees Varamyr walking through the trees with his shadowcat.[23] When the wildling camp is attacked by Stannis Baratheon's army in the battle beneath the Wall, Varamyr's shadowcat prevents Jon from entering Mance Rayder's tent to search for the Horn of Winter.[12] In the agony of the death of his eagle, Varamyr loses control of his shadowcat, which races into the woods.[12]

Varamyr Sixskins remembers Briar and her shadowcat, as well as how he had used his own shadowcat to intimidate women. Varamyr discovers it is even more difficult to take control of a human being than a shadowcat.[19]

Jon Snow remembers how Mance Rayder had compared some of the free folk to shadowcats, saying they prowl "where they please and will tear your dogs to pieces."[24]

Once he had watched a shadowcat stalk a ram, flowing down the mountainside like liquid smoke until it was ready to pounce.[1]

They won't trouble us. It's the dead they've come for. Cats can smell blood six miles off. They'll stay near the bodies till they've eaten every last stringy shred o' meat, and cracked the bones for the marrow.[1]

Off in the darkness a shadowcat screamed in fury, its voice bouncing off the rocks so it seemed as though a dozen other 'cats were giving answer. Once Jon thought he saw a pair of glowing eyes on a ledge overhead, as big as harvest moons.[13]

Shadowcats may be a reference by George R. R. Martin, a comic book fan, to the superhero Kitty Pryde, who has used the alias "Shadowcat".