Shiera Seastar was the last of the Great Bastards of King Aegon IV Targaryen, born to his last mistress, Serenei of Lys. The known lover of Brynden Rivers, she is said to have been the most beautiful woman of the Seven Kingdoms.[4]

Shiera was renowned as a beauty and seductress, with long Targaryen silver-gold hair, and a heart-shaped face. Although she had two mismatched eyes—one dark blue, the other bright green—it was said that the "defect" only enhanced her beauty. She was fond of ivory and lace and cloth-of-silver, but not gold, which she considered too vulgar.[1]

Shiera was a great reader, even at an early age, spoke many languages, and maintained a large and arcane library. She also was reputed to share her mother Serenei's skill in the dark arts. Shiera was known to possess a heavy silver necklace, alternating star sapphires and emeralds to compliment her unusual eyes.[1]

King Aegon IV Targaryen sired Shiera upon the ninth and last of his mistresses, Lady Serenei of Lys. She died giving birth to the last of the king's bastard children, naming her child Shiera, Star of the Sea.[1][4]

Shiera never married, but took many lovers, and numerous duels were fought for her favor. Her half-brother Brynden Rivers, known as Bloodraven, was her most ardent suitor, and repeatedly proposed marriage to her. Although she refused to marry him, Shiera did share her bed with him and was amused with his jealousy.[1] Her other half-brother Aegor Rivers, known as Bittersteel, also desired her, which only served to increase the hatred between Bloodraven and Bittersteel.[4]

There were rumors that Shiera used sorcery to aid Bloodraven when he served as Hand of the King and master of whisperers to King Aerys I Targaryen,[5] and that she bathed in blood to retain her beauty.[2] 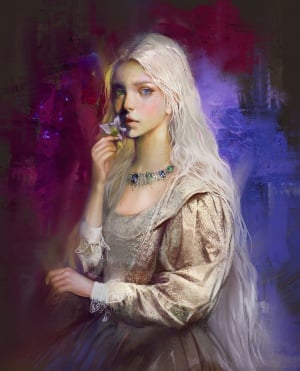 Bran Stark trains beyond the Wall with the ancient three-eyed crow, who calls himself Lord Brynden. Bran learns that this last greenseer once desired a woman, but her name is not mentioned.[6]

Duncan: You've known queens and princesses. Did they dance with demons and practice the black arts?
Aegon: Lady Shiera does. Lord Bloodraven's paramour. She bathes in blood to keep her beauty.[2]

Bittersteel and Bloodraven both loved Shiera Seastar, and the Seven Kingdoms bled.[7]

Though she never wed, she had many offers, and several lovers through the years. Duels were fought over the right to sit beside her, men killed themselves after falling from her favor, poets outdid each other writing songs about her beauty. Her most ardent admirer was her half-brother, Bloodraven, who proposed marriage to her half a hundred times. Shiera gave him her bed, but never her hand. It amused her more to make him jealous.[1]