From A Wiki of Ice and Fire
Jump to: navigation, search
For other uses, see Siege of Storm's End (disambiguation).

The siege of Storm's End is a short engagement during the War of the Five Kings. After both Stannis and Renly Baratheon proclaim themselves king, Stannis lays siege to Renly's seat, Storm's End, forcing Renly to ride for Storm's End to confront him. The conflict ends in victory for Stannis, and he gains a large part of Renly's cavalry following Renly's death. Having significantly increased his strength, this victory enables Stannis to march on King's Landing for the largest battle of the conflict, the Battle of the Blackwater.

Following the death of King Robert I Baratheon, his heir, Prince Joffrey, is crowned.[6] However, Robert's two brothers also express their claim to the throne. Robert's youngest brother, Renly Baratheon, is the first to present his claim. Having fled King's Landing with Ser Loras Tyrell shortly before Robert's death, Renly rode to Highgarden, married Margaery Tyrell, the daughter of Mace Tyrell, the Lord of Highgarden, and claimed the Iron Throne a fortnight later.[7] Renly's strength comes from both the Reach and the stormlands.[8]

Renly's elder brother, Stannis, who had fled to his seat on Dragonstone, later proclaims his own claim for the throne, on account of his belief that Joffrey and his siblings had not been fathered by Robert, but instead by Queen Cersei's twin brother, Ser Jaime Lannister.[1] Although Stannis has been gathering his strength for half a year, he still lacks the strength to attack King's Landing, as few Houses are sworn to Dragonstone and the rocky, volcanic islands surrounding Dragonstone have a sparse population. Additionally, Stannis considers his brother's proclamation as a treasonous act, and is angered that the men of the stormlands have given their support to Renly, the Lord of Storm's End.[1]

With his huge host, Renly begins his march from Highgarden on the Roseroad towards King's Landing, accompanied by his young bride,[2][9] but his host moves slow.[10]

Stannis receives counsel from a red priestess, Melisandre, who tells him of two futures she has seen in her flames; One in which Stannis is defeated in King's Landing by his brother Renly, and one in which he sails to Storm's End, where his brother shall die, and his men will flock to Stannis.[4] With the strength he has gathered thus far, Stannis sets sail for the stormlands.[10]

Stannis arrives in the stormlands with five thousand men[5] and lays siege to the coastal fortress Storm's End, Renly's seat.[10][11] Renly is at Bitterbridge with his army when the news reaches his camp. He splits his forces and rides with some twenty thousand cavalry to Storm's End to break the siege.[5] He confronts Stannis during a parley, with Lady Catelyn Stark in attendance, during which he offers Stannis a peach, but the two brothers are unable to set aside their differences. Neither will yield; Instead, they agree that a battle is set to start at dawn the next day.[5] However, shortly before the battle is to start, while being armored for battle by Brienne of Tarth, Renly is killed by a shadow assassin summoned by Melisandre.[12] Ser Emmon Cuy and Ser Robar Royce, who had been guarding the king's tent, accuse Brienne of the murder when they see Renly dead in Brienne's arms. Catelyn Stark, who had witnessed Renly's death, convinces Ser Robar that Brienne is innocent. Escaping Ser Emmon, Catelyn and Brienne flee the camp and head for the riverlands.[12] A raging Ser Loras Tyrell later kills Ser Emmon Cuy and Ser Robar Royce for failing to protect their king.[13] 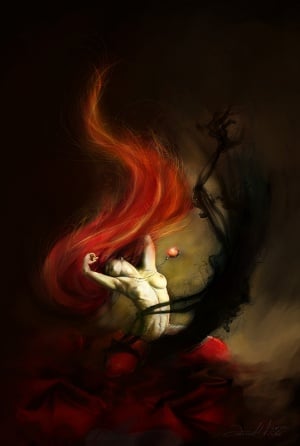 With Renly dead, the majority of the host that had accompanied him to Storm's End swears their allegiance to Stannis.[13] House Florent and both branches of House Fossoway also defect to Stannis, but a fifth of Renly's knights returns to Bitterbridge with Ser Loras Tyrell.[13] First to join Stannis is Lord Alester Florent, the uncle of Stannis's queen, Selyse.[13]

The siege continues as Storm's End's castellan, Ser Cortnay Penrose, refuses to yield the castle to Stannis[13] because he fears for the safety of King Robert I's bastard son Edric Storm.[4] During a parley beneath the walls, Cortnay offers single combat with a champion of Stannis's choosing, but is rebuffed by the king.[4]

In order to coerce Ser Cortnay, several ideas are proposed, among them storming the castle, leaving a force to mount a protracted siege, or threatening to kill Cortnay's father, Lord Penrose. Stannis refuses all of these suggestions. Instead, he turns to Davos Seaworth. To end the siege quickly, Davos smuggles Melisandre under the castle by boat, where he witnesses her giving birth to another shadow, who assassinates Cortnay.[4][14] Although it is said that Cortnay threw himself from a tower, Varys, the master of whisperers from Joffrey's small council, correctly points out that Cortnay had not seemed lost to despair.[14]

Lord Elwood Meadows, who becomes castellan after Cortnay, surrenders the castle to Stannis.[15]

Sixty thousand men from Renly's army remain encamped at Bitterbridge, but when news of Renly's death reaches them,[4] fighting breaks out between those who wish to support Stannis and those who follow House Tyrell's decision not to do so. Stannis sends Ser Parmen Crane and Ser Erren Florent to retrieve Renly's former army for him,[4] but they are taken prisoner.[16] Lord Randyll Tarly seizes the supplies and puts many men, mostly Florents, to death.[14] In King's Landing, the small council of King Joffrey decides to attempt to make an alliance with House Tyrell by offering to marry Joffrey to Margaery. Petyr Baelish, representing King Joffrey I,[13] travels to Bitterbridge and wins the allegiance of House Tyrell. Riders are sent north to warn Lord Tywin Lannister of Stannis's threat to the capital.[17]

Stannis names Ser Gilbert Farring as his own castellan of Storm's End,[3] with Elwood Meadows as his second in command.[16] He leaves two hundred men to hold Storm's End,[3] and, after burning the godswood as an offering to R'hllor,[18] begins his march north towards King's Landing while his fleet sets sail towards the city as well. The forces of Houses Baratheon, Lannister, and Tyrell meet in battle during the Battle of the Blackwater, one of the largest battles of the war.

Your Grace, I see no need for battle here. The castle is strongly garrisoned and well provisioned, Ser Cortnay Penrose is a seasoned commander, and the trebuchet has not been built that could breach the walls of Storm's End. Let Lord Stannis have his siege. He will find no joy in it, and whilst he sits cold and hungry and profitless, we will take King's Landing.[5]

Bring on your storm, my lord, and recall, if you do, the name of this castle.[4]