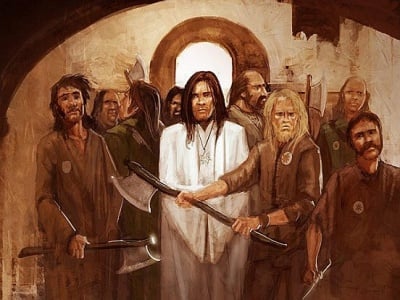 Sparrows with a septon - by Marc Simonetti ©

Sparrows are the poorest of those sworn to the Faith of the Seven during and after the War of the Five Kings. They take the name "sparrow" after the common bird.[1]

During the War of the Five Kings, septs are despoiled and men and women sworn to the Faith of the Seven are killed, mutilated, and injured. While traveling to Duskendale, Brienne of Tarth encounters self-proclaimed sparrows and begging brothers who are marching to King's Landing with the bones of martyrs, hoping to lay them before King Tommen I Baratheon and plead for protection.[1][2]

Ser Harys Swyft warns the small council that there are already two thousand sparrows in the capital, with the number rising each day. These faithful are especially furious about the Red Wedding.[3]

Ser Jaime Lannister observes two sparrows preaching to a crowd of hundreds of smallfolk at Cobbler's Square.[4] Septon Ollidor, a candidate to become the new High Septon, is disgraced when sparrows drag him from a brothel.[5] Sparrows instead carry one of their leaders, a small septon, into the Great Sept of Baelor.[2] The fool Moon Boy japes that this new High Septon is the "High Sparrow".[6]

Queen Regent Cersei Lannister observes hundreds of sparrows in the plaza and gardens of the Great Sept, and bones and skulls are piled about the statue of King Baelor I Targaryen.[2] Cersei, at the behest of the High Sparrow, overturns King Maegor I Targaryen's law that banned holy men from taking up arms in return for forgiving debt. Sparrows join the reborn Poor Fellows, one of the two branches of the Faith Militant, en masse.[2][7]

Jaime observes sparrows at Darry, the seat of his cousin, Lord Lancel Lannister. Lancel decides to join the Warrior's Sons.[7]

Some orphans are brought to the crossroads inn by sparrows so they can be protected by the brotherhood without banners.[8]

Taena: I have had a most wicked thought, Your Grace.


Cersei: Best keep it to yourself. The hill is thick with sparrows, and we all know how sparrows abhor wickedness.
Taena: I have heard they abhor soap and water too, Your Grace.


Cersei: Perhaps too much prayer robs a man of his sense of smell.[2]
—Taena Merryweather and Cersei Lannister

What have we become, when kings and high lords must dance to the twittering of sparrows?[9]