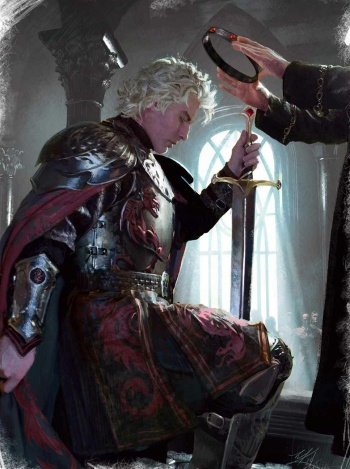 Aegon I Targaryen is crowned in the Starry Sept

The Starry Sept, also called the Sept of Oldtown,[1] is a large sept near the Honeywine in Oldtown.[2]

The Starry Sept has black marble walls and arched windows. Mansions of the pious are located near the sept.[2] A wide plaza is located outside of the sept.[3] The Starry Sept is rivaled only by the Great Sept of Baelor in King's Landing and the castle sept of Highgarden.[4] Just like Baelor's Sept, the Starry Sept is shaped as a dome.[5]{{Ref|TROTD|6|2}

The Starry Sept was built by Lord Triston Hightower, in honor of his mentor and earlier regent, Septon Robeson.[6] It was the seat of the High Septon for "a thousand years prior" to the Wars of Conquest.[2][N 1]

When Aegon I Targaryen landed at the mouth of the Blackwater Rush, the High Septon in Oldtown locked himself inside the Starry Sept and prayed for seven whole days while refusing to eat or drink. At the end of the seventh day he emerged from his fast and declared that the Faith of the Seven would not fight Aegon's Conquest, proclaiming that if they did Oldtown would burn and the Starry Sept would be destroyed. Lord Manfred Hightower heeded the prophecy and welcomed Aegon when he appeared before his gates. Aegon was then anointed in the Faith when he became Lord of the Seven Kingdoms.[7][8] The new king visited the High Septon within the Starry Sept during each of his progresses throughout the Seven Kingdoms.[9]

Prince Maegor Targaryen wed Ceryse Hightower in the Starry Sept in 25 AC.[10] After Aegon's death in 37 AC, King Aenys I Targaryen was anointed in the sept.[11] The High Septon denounced Prince Maegor after he wed Alys Harroway in 39 AC.[10] In 41 AC during the Faith Militant uprising, Queen Visenya Targaryen unsuccessfully advised her nephew, King Aenys, to destroy the Starry Sept and the Sept of Remembrance.[12][10] After becoming king, Maegor I threatened to destroy the building, which was defended by Warrior's Sons from Oldtown. The High Septon who opposed him abruptly died, however, and Oldtown's gates were opened to the Targaryen forces. The Most Devout then chose Pater as his replacement.[10] In 48 AC Septon Moon led thousands of followers to Oldtown to force Pater's successor, the so-called High Lickspittle, to denounce Maegor.[10]

King Jaehaerys I Targaryen gave a eulogy in the sept's plaza after the passing of the High Lickspittle in 54 AC.[3]

The Starry Sept was eventually replaced as the seat of the High Septon by the Great Sept of Baelor in King's Landing.[N 2]

Zachery Frey trains at the Sept of Oldtown.[1]