Walton, known as Steelshanks Walton, is a captain in service to Lord Roose Bolton.[4] In the television adaptation Game of Thrones he is played by Jamie Michie.

Walton is a tall and dour man[1][5] known as Steelshanks for the steel greaves he wears over his long legs.[4] Walton also armors himself in a mail shirt[1] and wields a spear.[6]

Steelshanks is loyal and brutal, but not cruel.[5]

Walton is a part of Lord Roose Bolton's force that captures Harrenhal. He assists with the executions of servants who aided House Lannister.[1] 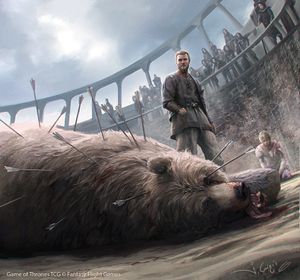 After Arya Stark escapes from Harrenhal, the girl thinks Roose will send Walton or Brave Companions to pursue her.[4]

Walton commands Ser Jaime Lannister's escort of two hundred men from Harrenhal to King's Landing.[2] Jaime persuades him with the promise of gold to turn back to Harrenhal so Jaime can save Brienne of Tarth from Vargo Hoat. After Jaime jumps into the castle's bear pit to save Brienne from a bear, Steelshanks' crossbowmen slay the bear to protect Jaime's life.[5]

Upon their arrival at King's Landing, Walton and his men are rewarded the gold they were promised. Ser Balon Swann finds quarters for the Bolton men.[7]

After Ser Gregor Clegane slays Prince Oberyn Martell in trial by combat, Walton takes possession of a girl claimed to be Arya. Walton's party departs the capital to bring the girl to Lord Roose, as the girl is to marry Ramsay Bolton and cement House Bolton's claim to Winterfell.[8]

Walton commands Roose's guards while the new Warden of the North stays in Barrowton.[9]

Walton travels with Lord Bolton to Winterfell for the wedding of Ramsay to "Arya" (actually Jeyne Poole).[3] After several men-at-arms have been found dead, Walton escorts Theon Greyjoy to a meeting with Roose, Lady Barbrey Dustin, Roger Ryswell, and Ser Aenys Frey.[10] Steelshanks and his men break up the fight between Manderlys and Freys when Ser Hosteen Frey attacks Lord Wyman Manderly.[6] 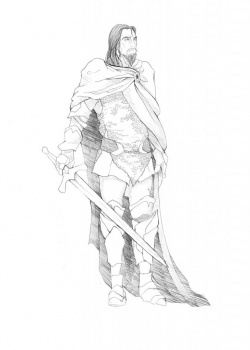 Jaime: Unless you take me back to Harrenhal, the song I sing my father may not be one the Lord of the Dreadfort would wish to hear. I might even say it was Bolton ordered my hand cut off, and Steelshanks Walton who swung the blade.
Walton: That isn't so.
Jaime: No, but who will my father believe?[5]

Steelshanks, he is called. A soldier of iron loyalty.[2]

Steelshanks Walton commanded Jaime's escort; blunt, brusque, brutal, at heart a simple soldier. Jaime had served with his sort all his life. Men like Walton would kill at their lord's command, rape when their blood was up after battle, and plunder wherever they could, but once the war was done they would go back to their homes, trade their spears for hoes, wed their neighbors' daughters, and raise a pack of squalling children. Such men obeyed without question, but the deep malignant cruelty of the Brave Companions was not a part of their nature.[5]