Stranger is the warhorse of Sandor Clegane.

Stranger is a heavy courser, almost as large as a destrier but much faster.[2] He is a handsome black stallion with a mean temper. He is gentle with his master, Sandor Clegane, but aggressive toward others.[2] The horse was blasphemously named after the Stranger, the death aspect of the Seven-Faced God.[2][1] 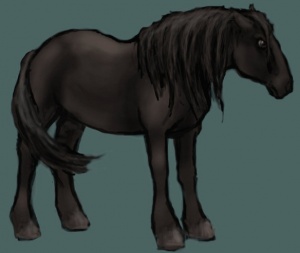 Dismounting just before the riot of King's Landing, Sandor Clegane is left afoot when Stranger gallops away with the royal party. When Tyrion Lannister sends Sandor and Bronn to contain the fire in Flea Bottom, Sandor only goes so he can find his horse.[3]

During the Battle of the Blackwater, Sandor rides Stranger up the plank and on to the deck of Prayer, hacking down anyone who blunders within reach.[4]

After deserting the Battle of the Blackwater because of the wildfire, Sandor escapes King's Landing on Stranger. After he is captured by the brotherhood without banners, Sandor wins his trial by combat in the hollow hill and is freed.[5] Lord Beric Dondarrion orders Anguy to kill Sandor's horse if he spots Sandor following them, but the archer and Lem would prefer to save the horse for their own use.[6]

After capturing Arya Stark, Sandor rides with her on Stranger through the riverlands. Arya rides double with Sandor, though he threatens that if she doesn't behave he'll truss her up and throw her over the back of the horse. Shortly after being kidnapped, thinking she can ride off before the Hound can catch her, Arya tries to steal Stranger when Sandor is relieving himself against a tree. Instead Stranger almost bites her face off.[2]

Sandor attempts to ransom Arya to Lady Catelyn Stark by bringing her to the Twins, where Lord Edmure Tully is to marry Roslin Frey. They approach the Twins disguised as peasants delivering salt pork for the wedding feast, with Stranger tethered to the wagon. When Ser Donnel Haigh and two squires accost them to check their business at the Twins, Haigh inquires about Stranger, who is too fine a horse for smallfolk. Sandor claims that the horse is a wedding gift from Lady Shella Whent to Lord Tully, an excuse Haigh accepts. One of the squires almost winds up in the mud when Stranger bites at the squire's own mount.[7]

When the battle at Red Wedding begins, some Frey knights ride at the wagon. Clegane cuts Stranger loose with a single slash of his sword, and leaps onto his back to fight. As Arya runs towards the Twins' open gates, the Hound rides her down, catching her with the flat of an axe.[8]

After they escape the Twins, Arya acquires a horse to ride, which she calls Craven. Although the mare is a good enough horse, Arya resents her for running away from the fighting at the Twins, and thinks that Stranger would have remained to fight.[9] When Arya abandons Sandor as he lays dying by the banks of the Trident, she saddles up Craven and rides away, but leaves Stranger with his master.[10] 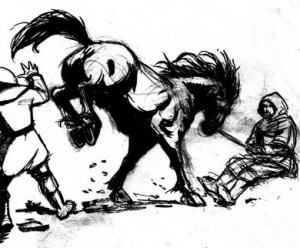 Driftwood on the Quiet Isle - by Pojypojy ©

As Brienne of Tarth and her companions arrive on the Quiet Isle, they make their way to a whitewashed stable. At the far end of the stable, away from other animals, a huge black stallion trumpets at the sound of their voices and kicks at the door of his stall. Brother Narbert reveals that the horse, now called Driftwood to avoid blasphemy, had broken Brother Rawney's shinbone, and bitten off Brother Gillam's ear when he tried to geld him. The Elder Brother explains the horse was once Sandor Clegane's steed, Stranger.[1]

Beric: Anguy, on the morrow, take the rear with Beardless Dick. If you see Clegane still sniffing after us, kill his horse.


Lem: Aye. It's the bloody rider we should be killing. We could use that horse.[6]
—Beric Dondarrion, Anguy, and Lem

He was gentle as an old gelding with his master, but otherwise he had a temper as black as he was. She had never known a horse so quick to bite or kick.[2]

Hyle: A handsome beast.
Narbert: The Seven send us blessings, and the Seven send us trials. Handsome he may be, but Driftwood was surely whelped in hell. When we sought to harness him to a plow he kicked Brother Rawney and broke his shinbone in two places.[1]

Driftwood is a beast of burden. The Smith gave men horses to help them in their labors.[1]

You may have seen a big black stallion in our stables. That was his warhorse, Stranger. A blasphemous name. We prefer to call him Driftwood, as he was found beside the river. I fear he has his former master's nature.[1]

—the Elder Brother to Brienne of Tarth

Stranger may have been inspired by Bucephalus, the black horse of Alexander the Great. Both Bucephalus and Stranger were successfully tamed only by their eventual masters.