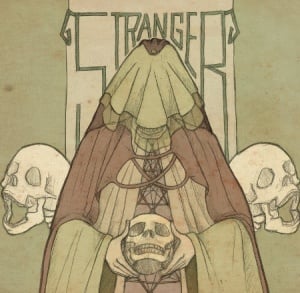 See also: Images of the Stranger

The Stranger represents death and the unknown, and leads the dead to the other world.[1][2] Whilst referred to as male, he is neither male nor female.[1] The Stranger's face has been described as half-human, concealed beneath a hooded mantle.[3][4] The wooden statue of the Stranger burnt on Dragonstone is carved to look more animal than human.[5]

Worshippers rarely seek favor from the Stranger, but outcasts sometimes associate themselves with this aspect of god.[citation needed]

Silent Sisters are sometimes referred to as the 'Stranger's wives'.[6] They clothe themselves in grey and keep their faces cowled except for their eyes.[7]

The House of Black and White contains a public shrine with idols of many death gods, including the Stranger.[8]

Catelyn Stark prays in a nameless village’s sept. The sept is modest and has no statues of the Seven, only rough charcoal drawings to represent them. Here the Stranger's face is a black oval, a shadow with stars for eyes. It makes Catelyn uneasy. She thinks to herself that she would get scant comfort there.[1]

Upon entering the sept of Maegor's Holdfast, on the eve of battle Sansa Stark sees that there are even a few candle flames dancing below the Stranger’s half-human face. Sansa visits each of the Seven in turn, lighting a candle at each altar.[citation needed]

During a meeting with the small council Cersei that promises that before she is done with Sansa Stark she will be “singing to the Stranger, begging for his kiss” [10] During the same meeting Cersei thinks to herself that one day she must light a candle to the Stranger for carrying Renly off and leaving Stannis. If it had been the other way around her life would have been harder.[citation needed]

In Braavos the slowly dying Master Aemon tells Samwell that the Stranger waits outside his door and will not be denied.[citation needed]

In the House of Black and White Arya Stark finds a dead young man at the feet of the Stranger.[citation needed]

During her confinement Cersei Lannister prays until her knees are raw and bloody, until her tongue feels thick and heavy. She prays to all the aspects of the godhead, even the Stranger.[citation needed]

As the Second Siege of Meereen is beginning, Tyrion Lannister thinks to himself that the Stranger has mounted his pale mare and is riding toward them with his sword in hand.[citation needed]

In Braavos the Stranger is featured in the new play, The Bloody Hand.[citation needed]

Before I am done with her, I promise you, she will be singing to the Stranger, begging for his kiss.[10]

The Stranger waits outside my door and will not be denied.[11]

I thought I was the Warrior and Cersei was the Maid, but all the time she was the Stranger, hiding her true face from my gaze.[4]