The Rogue Prince, or, A King's Brother is a novelette[1] released June 17, 2014 as part of the Rogues anthology, edited by George R. R. Martin and Gardner Dozois.[2] It was later slightly expanded and included in Fire & Blood.[3]

It tells the story of the years leading up to the calamitous events of The Princess and The Queen during the reign of King Viserys I Targaryen, with particular attention to the role played by the king’s brother, Prince Daemon Targaryen, as written by Archmaester Gyldayn.

The novella gives an account of the lives at the court of King Viserys I Targaryen in King's Landing, and about the lives of those connected to House Targaryen, paying special attention to Prince Daemon Targaryen, his niece, and later third wife, Princess Rhaenyra Targaryen and her children, King Viserys I Targaryen and his second wife and the children from his second marriage. The story takes off in 103 AC with the death of King Jaehaerys I, after shortly describing his final two years, and ends in 129 AC, just mere hours before The Princess and the Queen takes off.[4] 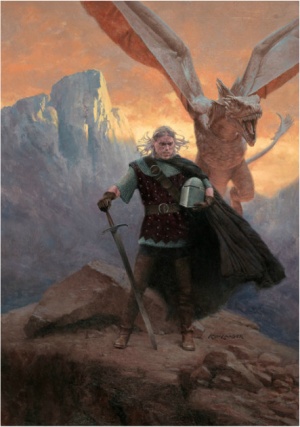 So far, The Rogue Prince has only appeared in the anthology Rogues, released on June 17, 2014 by Bantam. However, it was later slightly expanded and included in the first part of the history of the Targaryens, Fire & Blood, released on November 20th, 2018, as the chapter "Heirs of the Dragon—A Question of Succession".[3]