From A Wiki of Ice and Fire
(Redirected from The silver)
Jump to: navigation, search

The silver mare[6] is a mare gifted as a filly to Daenerys Targaryen by Khal Drogo at their wedding. Since it is Dothraki custom to not name horses, Daenerys thinks of it as her silver[2] and the silver.[1]

See also: Images of the silver

The silver is grey, with a silver mane.[2] She is young and spirited.[2] Daenerys Targaryen thinks the horse is breathtaking.[2] 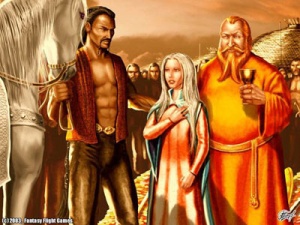 Drogo brings forth the silver, his bride gift to Daenerys Targaryen, by Amok ©

Khal Drogo presents Daenerys Targaryen with the horse at their wedding outside of Pentos. Dany is not an experienced rider, but the silver responds well to her non-verbal commands and they leap through a fire.[2]

While traveling through the Dothraki sea toward Vaes Dothrak, Daenerys suffers from saddle sores and blisters. Irri provides instruction to the girl, but Daenerys feels she learns more from the silver, which matches her instincts.[1] The silver easily keeps pace with Drogo's stallion, but Daenerys is relieved when they arrive at Vaes Dothrak.[7] Daenerys tries to follow the Dothraki custom of pregnant women staying on horseback almost up to the time of giving birth, but she sometimes uses a litter.[3]

After Ser Jorah Mormont and Jhogo defend Daenerys against a poisoner in the Western Market, Drogo gives them free choice on claiming any horse from his herds, excluding his red stallion and the silver.[3] Two days later, Drogo and his khalasar leave Vaes Dothrak, heading on a southwest course. Drogo and his red stallion take the lead, with Daenerys and the silver right beside them. Chains are fastened to the silver's halter, the horse dragging along the would-be assassin.[3]

After Drogo becomes incapacitated from wounds inflicted fighting the khalasar of Ogo, Drogo's khalasar dissolves into a dozen splinter groups. Daenerys claims those left behind after Drogo's death as her own khalasar.[8]

Daenerys leads her khalasar into the red waste, mounting the silver. Like the rest of the khalasar's horses, the silver survives on a diet of devilgrass.[6] The surviving horses are able to regain their strength in Vaes Tolorro, which has sufficient grass and water for them.[6]

Daenerys crosses the gates of Qarth, but the mare shies when Xaro Xhoan Daxos and his camel approach, as horses do not abide the close presence of camels.[9] Daenerys uses a palanquin for her transportation in Qarth, a gift from Xaro.[10][11]

In the House of the Undying, Dany has a vision depicting her silver trotting through the grass to a darkling stream beneath a sea of stars. There is no mention of a rider.[11] Another vision might also involve the silver,[11] as it depicts a silver horse dragging the bloody corpse of a naked man, presumably the assassin.[3] A third vision depicts Daenerys and her silver riding past ten thousand slaves who call her "mother".[11]

Following the death of the Undying Ones, Daenerys decides to dress and act as a Dothraki again. She rides her silver along Qarth's quays, docks, and storehouses to the harbor reserved for foreign vessels. There she discovers that Magister Illyrio Mopatis sent her three ships: Joso's Prank, Saduleon, and Summer Sun.[12] 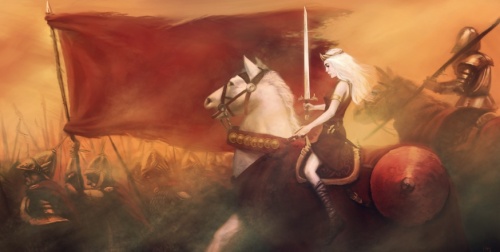 Queen Daenerys Targaryen leading her army astride her silver, by Rene Aigner ©

Daenerys's horses are nervous and restless when she and her followers sail to Astapor.[13] She rides her silver to the Plaza of Punishment for her trade of a dragon, Drogon, for Unsullied. She inspects the eunuch soldiers from her horse after receiving the whip from Kraznys mo Nakloz. Atop the silver, Daenerys orders the slave soldiers to kill the Good Masters during the fall of Astapor.[14]

After the battle near Yunkai, Daenerys greets slaves freed from the city atop her silver. The new freedmen call her terms for "Mother" in various languages, including Mhysa. The freedmen part ranks before the mare, allowing Daenerys to gallop through the crowd.[15]

During the siege of Meereen, Daenerys calls for Missandei to have the silver and the girl's own horse saddled, in preparation for a visit to the camps with Arstan Whitebeard, actually Ser Barristan Selmy, as her guard. A number of adults kneel in their path and are allowed to touch the stirrups of the silver. Daenerys stops the horse to converse with a pregnant woman, and is then assaulted by Mero. He yanks the young rider from the saddle and the whinnying silver backs away from the assailant. Arstan defeats Mero, who is then killed by freedmen.[16]

Daenerys rides into Meereen when the city is already secure, following the crush of its last resistance and the completion of the sacking. Her freedmen remove many corpses from the broken city gate, clearing a path for the silver. Rider and horse pass through the brick street, witnessing the remains of the battle.[17] With Meereen taken, Daenerys takes the Great Pyramid as her seat.[17]

Daenerys rides the silver while visiting the sick Astapori refugees camped outside Meereen.[18]

Daenerys intends to ride the silver to the Temple of the Graces for her wedding ceremony with Hizdahr zo Loraq. However, Missandei reminds her that she cannot ride in a tokar. Daenerys sees the sense in this and arranges to be taken to the temple in a sedan chair.[19]

Dany disappears from Daznak's Pit's atop Drogon,[20] and most of her khalasar depart Meereen to search for her in the Dothraki sea. When Barristan goes to have a clandestine meeting with Skahaz mo Kandaq within the Great Pyramid, he makes his way past the elephants and the silver to the back of the stables.[21]

Astride Drogon in the Dothraki sea, Daenerys feels as if she is learning to ride all over again, comparing and contrasting the reactions of the silver and the black dragon. While the silver's first instinct is to flee from danger, Drogon's instinct is to attack.[22] Dany is surprised at the tall height of the Dothraki sea, recalling that it never seemed so high from the back of her silver.[22]

Barristan rides the silver mare during the second siege of Meereen. Unlike most horses, the silver has become accustomed to the sight and scents of dragons.[4] 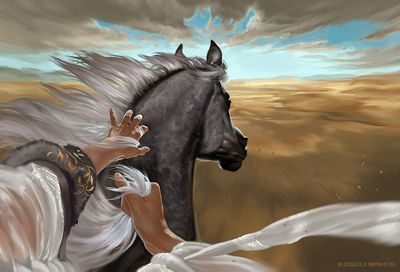 She was a young filly, spirited and splendid. Dany knew just enough about horses to know that this was no ordinary animal. There was something about her that took the breath away. She was grey as the winter sea, with a mane like silver smoke.[2]

Illyrio: Silver for the silver of your hair, the khal says.


Illyrio: She is the pride of the khalasar. Custom decrees that the khaleesi must ride a mount worthy of her place by the side of the khal.[2]
—Illyrio Mopatis and Daenerys Targaryen

Tell Khal Drogo that he has given me the wind.[2]