From A Wiki of Ice and Fire
(Redirected from Tongueless)
Jump to: navigation, search 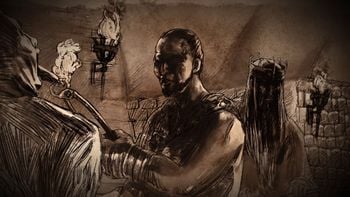 The practice of tongue mutilation is a method of punishment and torture, usually enforced to render the victim mute and unable to spread certain tales or information.

A tongueless person is disadvantaged by being rendered mute, and can therefore tell no tales.[1][2] Removal of the tongue can be done out of cruelty, punishment, torture, or vengeance. The mere threat to rip out tongues can be effective.[3] Tongues can be torn out with hot pincers[3][4] or cut out with a blade.[5]

Euron Greyjoy removes the tongues of many who serve him.[6][7][2] The silent sisters are falsely rumored to have had their tongues removed,[8] but in actuality they have taken a vow of silence.[9]

King Viserys I Targaryen decreed that any person who questioned the paternity of his daughter Rhaenyra's children with Ser Laenor Velaryon would have their tongues ripped out.[10]

King Aerys II Targaryen had Ser Ilyn Payne's tongue ripped out with pincers[11] as punishment for claiming that Lord Tywin Lannister, the Hand of the King, was the one who truly ruled the Seven Kingdoms.[12]

Varys employs children with their tongues removed as his little birds.[13]

Victarion Greyjoy espies the Silence and is disturbed to note that her motley crew of mutes and mongrels speak no word as the Iron Victory sails near. [14] Victarion later confides his doubts regarding Euron Greyjoy to the tongueless dusky woman.[6]

Lord Robert Arryn complains about Marillion's singing and says to Alayne Stone that her supposed father, Lord Petyr Baelish should have cut out the imprisoned singer's tongue. Alayne thinks to herself that Marillion needed his tongue so that he could confess to the murder of Lady Lysa Arryn.[15]

Ser Jaime Lannister reveals many of his darker secrets to Ilyn Payne, knowing the mute and illiterate knight can never reveal them to anyone.[1]

The normally placid King Tommen I Baratheon becomes furious when his mother says she would gladly have Margaery Tyrell's tongue torn out.[16] To punish him she orders that Tommen is to whip Pate and if His Grace refuses or protests, Qyburn is to be summoned to remove Pate's tongue. [16]

Skahaz mo Kandaq advises Queen Daenerys Targaryen to at least rip out Hazzea's father's tongue to silence him about the girl's death.[17]

Daario Naharis cuts out the tongue of one of the Long Lances for saying Meereen would soon be under siege.[18]

When Ralf the Limper suggests that the Iron Fleet is on a cursed voyage, Victarion slaps him twice and threatens to nail his tongue to the mast.[2]

Falia Flowers is lashed next to Aeron Greyjoy onto the prow of the Silence. He sees that she is naked, pregnant and her tongue has been cut out.[19]

Characters left alive with no tongue

When you tear out a man's tongue, you are not proving him a liar, you're only telling the world that you fear what he might say.[31]

I am not in the habit of being questioned by servants, Nan. Must I have your tongue out?[32]

Aerys also felt the need to remind men that he was king. And he was passing fond of ripping tongues out as well. You could ask Ser Ilyn Payne about that, though you'll get no reply.[33]

—Tywin Lannister to Joffrey I Baratheon

Tommen: Margaery says—
Cersei: —a deal too much. For half a groat, I'd gladly have her tongue torn out.[16]

—Tommen I Baratheon and Cersei Lannister

I say you are not lord, no knight, no envoy, only a thief and a spy, a peddler of lies and treasons. I should tear your tongue out with hot pincers and deliver you to the Dreadfort to be flayed.[4]