From A Wiki of Ice and Fire
(Redirected from Tower of Joy)
Jump to: navigation, search 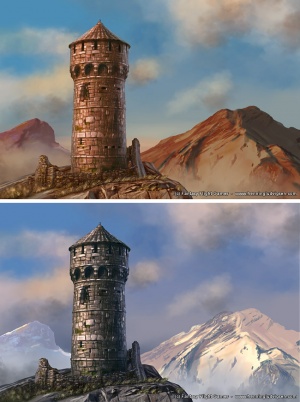 Tower of joy, by Henning Ludvigsen, FFG©.
Note: The bottom image is the original version, but was redone to make the top image, which features the red mountains of Dorne.

The tower of joy[1] or Tower of Joy[2] was a round tower in the northern edge of the Red Mountains of Dorne.[1] It was located at the north end of the Prince's Pass,[3][4] with Kingsgrave to the south and Nightsong to the north.[5]

The structure was named the tower of joy by Prince Rhaegar Targaryen.[1][6]

At the end of Robert's Rebellion, Lord Eddard Stark and six of his companions (Howland Reed, Lord Willam Dustin, Ethan Glover, Martyn Cassel, Theo Wull, and Ser Mark Ryswell) approached the tower. They found it guarded by three members of the Kingsguard (Ser Arthur Dayne, Ser Oswell Whent, and Lord Commander Gerold Hightower). Eddard and Howland were the only survivors of the resulting battle. Eddard had the tower torn down to build cairns for the eight deceased.[1]

According to a semi-canon source, Lyanna Stark was found dying inside the tower by her brother, Eddard, after the fight.[6]

George R. R. Martin may have been inspired by the Joyous Gard. According to Arthurian legend, Lancelot names the castle himself. He later rescues Queen Guinevere, and brings her to the Joyous Gard.