Tower of the Hand 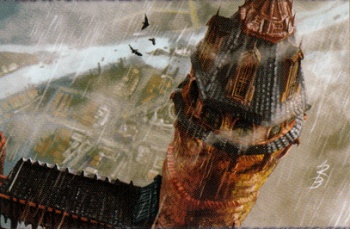 The Tower of the Hand by Ryan Barger © Fantasy Flight Games

The Tower of the Hand is located in the Red Keep on Aegon's High Hill in King's Landing. It contains the chambers of the Hand of the King.

See also: Images of the Tower of the Hand 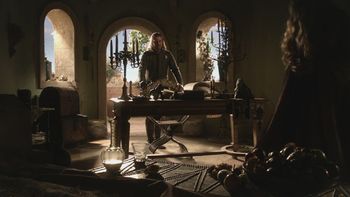 The Tower of the Hand has crenellated battlements.[1] The tower's private audience chamber is not as large as the king's, but it has Myrish rugs, wall hangings, and a golden-tinted round window that give it a sense of intimacy.[2]

The bedchamber of the Hand of the King has a canopied bed and sconces on the walls and rushes on the floor.[3] Inside its hearth is a small door opening on a secret passageway known to Lord Varys, the master of whisperers. From this door one can climb down two hundred and thirty rungs which lead to the chamber of the dragon mosaic, where half a dozen tunnels meet.[4] Down a hallway from the bedchamber is the privy tower.[4]

The tower's Small Hall, named in contrast to the Great Hall of the Red Keep, is a long room with a high-vaulted ceiling and bench space for two hundred. It has trestled tables[5] and great wooden doors.[6]

The Tower of the Hand also has a solar and a garderobe. The tower has tall windows.[7]

Construction of the Red Keep began in 35 AC during the reign of King Aegon I Targaryen, and the castle was completed in 45 AC during the era of Maegor I Targaryen. While inspecting the Tower of the Hand in 44 AC, Lord Lucas Harroway was thrown to his death from its top by Maegor's Kingsguard.[8]

The Hand of King Jaehaerys I, Prince Baelon Targaryen, died of a burst belly in the Tower of the Hand in 101 AC.[10]

Queen Alicent Hightower took up residence in the Tower of the Hand during the Dance of the Dragons, as her father, Ser Otto, was Hand of the King to Aegon II Targaryen. Blood and Cheese infiltrated the tower and assassinated Prince Jahaerys.[11] The Red Keep was occupied by Queen Rhaenyra Targaryen, Aegon's rival, after the fall of King's Landing. Rhaenyra ordered the arrest of Ser Addam Velaryon in reaction to the Two Betrayers and First Tumbleton, but Lord Corlys Velaryon forewarned his kin. Corlys, Rhaenyra's Hand, was then arrested by Ser Luthor Largent in the tower.[12] Ser Tyland Lannister resided in the Tower of the Hand when the regency of Aegon III began.[13] Lotho and Roggerio Rogare were imprisoned in the tower after the Lysene Spring.[14]

Lord Eddard Stark is appointed Hand of the King by King Robert I Baratheon[15] and moves into the Tower of the Hand.[16] Ned eats with his guards in the Small Hall, which is also where his daughter Arya trains with Syrio Forel.[5] During the coup against Lord Stark, Syrio protects Arya from Ser Meryn Trant and House Lannister guards in the Small Hall.[6]

Lord Tywin Lannister names his son Tyrion the acting Hand in his absence. Tyrion takes up residence in the Tower of the Hand.[17] Tyrion has Lord Janos Slynt arrested in the Small Hall.[18]

Wounded by Ser Mandon Moore during the Battle of the Blackwater, Tyrion is moved from the Tower of the Hand into Maegor's Holdfast.[19] 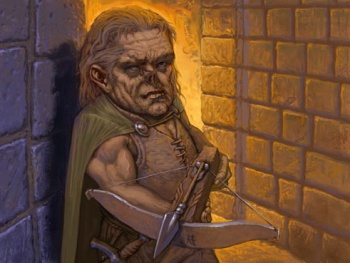 Lord Tywin takes over as Hand and moves into the Tower of the Hand.[20] After Tyrion weds Sansa Stark, their wedding feast is held in the Small Hall.[21]

Before fleeing the Red Keep, Tyrion visits his father in the tower, gaining access through the secret passageway. There, in the Hand's bedchamber, he discovers his lover Shae in Tywin's bed. Tyrion strangles Shae, arms himself with a crossbow hanging on the wall, and then confronts his father in the privy. Tyrion slays Tywin in fury and escapes the same way he came in.[4]

Lord Tywin is discovered murdered in the Tower of the Hand. As Queen Regent Cersei Lannister is about to view her father's body, which has been moved to his bed, she notices the secret door that she was told about when the news of Tywin's death was delivered. The door gapes open behind the ashes of the hearth, no bigger than an oven. She thinks to herself that a man would need to crawl through it.[22] Ser Jaime Lannister and his men reduce the Tower of the Hand to a shell in their unsuccessful search for Tyrion.[1] Cersei decides to burn the building.[1]

After the wedding feast of King Tommen I Baratheon and Margaery Tyrell is held in the Small Hall, Cersei leads the guests outside to watch as the pyromancers set the Tower of the Hand on fire. Fifty pots of wildfire placed inside the tower along with logs and casks of pitch are set alight. The Tower of the Hand is ruined. The greater part of Tyrion's possessions, which were still in the tower, are also destroyed.[1]

During the siege of Riverrun, Lady Genna Lannister asks Jaime if it is true that Cersei burned the Red Keep but Jaime tells her that it was only the Tower of the Hand. Genna replies that Cersei would have done better to leave the tower and instead burn her Hand, Ser Harys Swyft.[23]

Cersei tells Ser Kevan Lannister that Tommen told her that Lord Mace Tyrell intends on rebuilding the Tower of the Hand. Kevan concurs telling her that the new tower is to be twice as tall as the one she burned.[24]

Cersei: Our lord father was murdered in that tower. I cannot bear to look at it. If the gods are good, the fire may smoke a few rats from the rubble.


Cersei: Him, and Lord Varys, and this gaoler.[1]
—Cersei Lannister and Jaime Lannister

When Cersei looked up she saw the tower's crenellated battlements gnawing at a hunter's moon, and wondered for a moment how many Hands of how many kings had made their home there over the past three centuries.[1]