Tytos Lannister was the Lord of Casterly Rock and the head of House Lannister during the reigns of kings Aegon V, Jaehaerys II, and Aerys II Targaryen. He is the grandfather of Cersei, Jaime and Tyrion by his eldest son, Tywin Lannister.

An amiable and jovial gentleman, Tytos was called the Laughing Lion prior to the death of his beloved wife, Jeyne Marbrand.[1] However, he was also weak willed, eager to please, slow to anger, quick to forgive, and too trusting by half. He saw the good in everyone, great and small, but this trust blinded him to threats to House Lannister.[1]

Tytos was a fat man,[4] he loved eating cheese and cakes, and drinking beer.[2] While Lord of Casterly Rock, Tytos loaned money to lords who never bothered to repay him, and his bannermen openly ignored his orders.[5] Guests at his court were allowed to mock him to his face, called "twisting the lion's tail".[1]

According to semi-canon sources, Tytos was a squire in his youth but was never knighted. He loved watching tourneys, but never participated in one.[2]

Tytos was the third-born son of Lord Gerold Lannister and Lady Rohanne Webber. His elder twin brothers were Tywald and Tion; Tywald was slain in the Peake Uprising in 233 AC. Tytos married Jeyne Marbrand at Casterly Rock in 235 AC and had five children with her.[1] Tytos became the heir of Casterly Rock in 236 AC, after the death of Tion at the Battle of Wendwater Bridge during the Fourth Blackfyre Rebellion.[1]

According to Maester Beldon, Ellyn Reyne, widowed after the death of Tion, tried to seduce the new heir, Tytos, so he would set aside Jeyne for Ellyn. Tytos apparently was so intimidated by Ellyn that he failed to perform and in shame confessed to Jeyne, who forgave him but not her good-sister, Ellyn. Jeyne informed her good-father, Lord Gerold, who hastily wed Ellyn to his elderly bannerman, Lord Walderan Tarbeck.[1]

Gerold took firm control of the westerlands and was determined to do everything he could to prepare his unpromising new heir for lordship. Gerold was not blind to his son's flaws though and knew Tytos would be unsuitable for the positions of Lord of Casterly Rock and Warden of the West.[1] 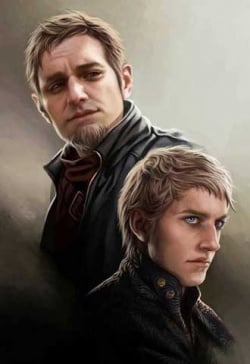 Tytos became Lord of Casterly Rock in 244 AC after the death of his father, Gerold. Bannermen and merchants took advantage of the weak-willed Tytos, who was eager to please.[1] The power of House Lannister waned and many other neighboring Houses grew in strength. Many said that the Lion of Lannister was no longer a beast to fear and japed about toothless lions.[5]

According to semi-canon sources, Tytos' weakness led to defiance from his lords bannermen. Lord Farman of Fair Isle began to build warships to defend his coasts from ironborn raiders despite Tytos' opposition, as the Warden of the West feared offending House Greyjoy of Pyke. Three landed knights and a petty lord whose lands bordered The Reach renounced their allegiance to Casterly Rock and swore fealty to Highgarden arguing that House Tyrell guaranteed more protection than House Lannister. Meanwhile, Lords Jast and Falwell, instead of seeking a ruling from their overlord, chose to settle a private quarrel with a melee that led to the deaths of nine men and twenty-seven being maimed or wounded but didn't settle the quarrel. For his part, Lord Stackspear doubled the taxes on his smallfolk, despite that Lord Tytos had forbidden it, and even hired a company of Volantene sellsword to enforce his edict.[2]

According to his daughter Genna, Tytos agreed to marry her to Emmon Frey, the second son of Lord Walder Frey, just to please the Lord of the Crossing. The betrothal was announced at a feast in 252 AC, with most of the lords of the west in attendance. Upon the announcement, Lord Roger Reyne, the Red Lion of Castamere, left the hall in anger and Lady Ellyn Tarbeck laughed aloud. The rest of Tytos's vassals sat on their tongues, and only Tytos's eldest son, Tywin Lannister, spoke out against the wedding because he thought it an uneven match.[6] Tytos later sent Tywin to King's Landing to serve as a royal cupbearer at King Aegon V Targaryen's court.[1]. According to a semi-canon source, Tytos and Tywin had quarreled at Tytos' solar, shouting at each other, with some swearing that Tywin had even slapped his father, though this was never proven.[2]

House Reyne power grew under Tytos's poor leadership, as did their close allies in House Tarbeck, as Ellyn was Roger's sister. Lady Tarbeck was not slow to take advantage of Tytos's willingness to part with large sums of gold, borrowing heavily and using the money to restore the crumbling Tarbeck Hall, strengthening the curtain walls, rebuilding its keep and furnishing its keep with a splendor to rival any castle in the west.[1]

Normally jovial, Tytos became sorrowful after his wife, Jeyne, died within a moon of giving birth to a son, Gerion, in 255 AC. Conditions in the westerlands became dismal in the following years; bandits and outlaws prowled the roads, while bannermen ignored Tytos's orders and saw to their own affairs. Thrice in his reign, King Aegon V Targaryen sent the forces of the Iron Throne to intervene and restore order to the west, but conflict resumed after the king's knights departed.[1]

During the War of the Ninepenny Kings, Lord Tytos answered the call of the new king, Jaehaerys II Targaryen, sending eleven thousand westermen under the leadership of his younger brother, Ser Jason Lannister. Tytos also sent his three eldest sons—Tywin, Kevan, and Tygett Lannister—to fight in the conflict. Tytos remained at Casterly Rock, taking Gerion's wet nurse as his mistress. Roger Reyne took command of the westermen on campaign after the death of Jason at Bloodstone.[1]

Battle hardened from the war, Tytos's sons were determined to restore the power of House Lannister. Lord Tytos protested feebly before returning to the comfort and embrace of his mistress. Tywin began by demanding the repayment of the gold his father lent out; those who could not repay immediately had to send a hostage to Casterly Rock until their debt was settled. He charged his brother, Ser Kevan, with command of five hundred veterans knights to rid the westerlands of robber knights and bandit outlaws. Some hastened to obey, and Ser Harys Swyft is said to have stated, "The lion has awoken."[1] Unable to pay his loan at the time, Harys agreed to surrender his daughter Dorna into Kevan's custody, and elsewhere collectors were met with sullen resistance and open defiance. Lord Reyne reportedly laughed when he read Tywin's edicts and counseled his friends and vassals to do nothing.[1]

Lord Walderan Tarbeck rode to Casterly Rock to confront Lord Tytos, confident he could easily cow Tytos to rescind his son's edicts. Tytos was not present when Walderan arrived at court, however, and the young Tywin ordered Lord Walderan imprisoned for disloyalty. In return, Ellyn Tarbeck seized three Lannisters—two Lannisters of Lannisport, as well as Stafford Lannister, whose sister Joanna was betrothed to Tywin—and threatened them harm unless Walderan was returned. This awoke Lord Tytos, who ignored Tywin's suggestion that Walderan should be sent back to his wife in three pieces, one for every Lannister taken. Tytos returned Walderan unharmed and forgave the Tarbeck debt to House Lannister.[7]

Less than a year later in 261 AC, Walderan and Roger renounced Tytos in the Reyne-Tarbeck revolt. Acting without his father's leave, Tywin destroyed Tarbeck Hall and Castamere and extinguished Houses Reyne and Tarbeck.[8]

While his son and heir, Ser Tywin, was named Hand of the King by the newly-crowned King Aerys II Targaryen in 262 AC, Tytos remained at Casterly Rock, though after the destruction of the Reynes and Tarbecks by his heir, none of his remaining vassals caused further trouble.[1]

One autumn, Tytos came between a lioness and her prey. The lioness tore into Tytos's horse and was about to attack him as well, when the kennelmaster of Casterly Rock came to his rescue with his dogs, losing his leg and three dogs in the process. Out of gratitude, Tytos gave the kennelmaster lands and a towerhouse and took his son as a squire, thereby creating House Clegane.[9]

In his last few years, Tytos became very fat[10] and took a new mistress, a commonborn daughter of a candlemaker. She helped herself to the late Jeyne Marbrand's jewels and clothes and also began ordering about household knights, dismissed servants, and sat in attendance when Tytos was absent. While Tywin was in King's Landing In 267 AC, Tytos died of a heart attack while climbing stairs to see her.[10] Tywin, the new Lord of Casterly Rock, ordered a walk of atonement through Lannisport for his father's mistress.[11]

The only influence Tytos had on his son was that Tywin mistrusted laughter and that he became a hard man.[5][12] Tytos did not forget his children when he died, and left behind a generous inheritance for Tywin, Kevan, Genna, Tygett, and Gerion.[13]

Lord Tytos was an altogether different character [to Tywin], amiable but ineffectual, and he allowed himself to be pushed around a good deal, by a number of people.. including Lord Walder Frey (ever wonder how Genna came to marry so poorly?) and the Red Lion of Castamere, the richest and most powerful Lannister bannerman, and a formidable soldier/warrior in his own right...[14]

His lordship wants only to be loved. So he laughs, and takes no offense, and forgives, and bestows honors and offices and lavish gifts on those who mock him and defy him, thinking thereby to win their loyalty. Yet the more he laughs and gives, the more they despise him.[1]

—Beldon in a letter to the Citadel

Our own father was gentle and amiable, but so weak his bannerman mocked him in their cups. Some saw fit to defy him openly. Other lords borrowed our gold and never troubled to repay it. At court they japed of toothless lions. Even his mistress stole from him. A woman scarcely one step above a whore, and she helped herself to my mother's jewels![5]

Tytos was the third-born son of his father, Gerold Lannister, and mother, Rohanne Webber. He had two older twin brothers, Tywald and Tion, and a younger brother, Jason Lannister.[1]