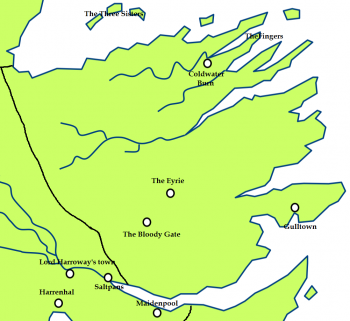 The Vale of Arryn or the Vale is one of the constituent regions of the Seven Kingdoms of Westeros. It was formerly a sovereign nation ruled by the Kings of Mountain and Vale before Aegon's Conquest. The Mountains of the Moon surround the smaller Vale proper,[2] although the valley's name is often applied to all of House Arryn's realm.[3]

The Vale is ruled by the Arryns from the castle known as the Eyrie. Notable houses of this region include Baelish, Belmore, Corbray, Egen, Grafton, Hersy, Hunter, Melcolm, Redfort, Royce, Templeton, and Waynwood.[4][5] Bastards of noble origin raised in the Vale are given the surname Stone.[6] 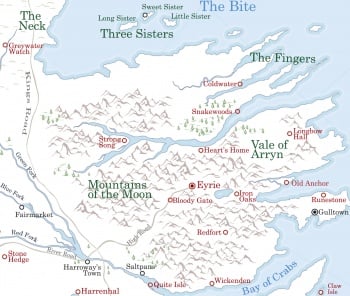 Map (click to zoom)
See also: Category:Places in the Vale

The Vale is located on the eastern shore of Westeros, a land of fertile soil, rivers, and lakes, protected by its largely impassable Mountains of the Moon. The Vale tends to be slightly isolated from the rest of Westeros. Its harsh winters make travel only possible through the mountains during warmer years, and rebellious mountain clans make travel even more dangerous. The Vale can be reached through the high road, which connects the Vale and the riverlands, and is protected by the Bloody Gate.

The mountainous border of the Vale of Arryn proper appears to include the Bloody Gate in the west and the Eyrie and Longbow Hall to the north. The fertile lands within the valley include Ironoaks, Old Anchor, Redfort, and a peninsula containing the city of Gulltown and Runestone. The town of Wickenden is located along the Bay of Crabs, in the mountains south of the valley. Castles north of the Vale proper in the valleys of the Mountains of the Moon and the snakewood forest include Coldwater, Heart's Home, Snakewood, and Strongsong.[1] 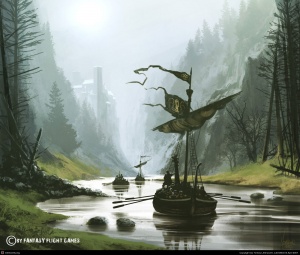 Some of the people living in the foothills of the Mountains of the Moon have rejected the authority of the Eyrie and live by their own rules. These mountain clans, such as the Black Ears and the Burned Men, are descendants of the First Men[2] who raid unwary travelers and skirmish with the knights of the Vale.

The valley's rich black soil allows the Valemen to grow wheat, corn, and barley. Not even in Highgarden do the pumpkins grow any larger nor is the fruit any sweeter.[6] House Waxley is known for producing scented candles in Wickenden. The candles can be scented with nutmeg and other costly spices. There is at least one rock quarry in the Vale, which produces “white stone” suitable for use in castle walls.

According to a semi-canon sources from 2005, the Vale can raise perhaps as many as forty-five thousand men.[10] Their strength is comparable to the North and Dorne, according to George R. R. Martin.[11] The houses Royce of Runestone, Waynwood, Hunter, Redfort, Belmore and Templeton together are able to raise twenty thousand men,[12] while House Royce of the Gates of the Moon can field only three hundred.[13]

It is said that the Kings of Mountain and Vale did not neglect their fleets when they still reigned, which might have counted hundreds of ships at Gulltown.[14] 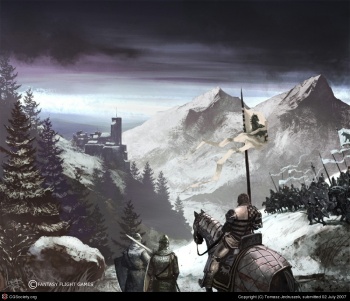 During the Age of Heroes, the Vale was thinly populated and was ruled by a score of petty First Men kings. The Winged Knight is among the legendary heroes of the Valemen from thousands of years ago.[5]

The Vale was where the Andals landed when they began their invasion of Westeros. Rather than unite against the newcomers, many of the First Men rulers sought alliances with the Andals, often with disastrous results.[14] House Arryn claimed the Vale after defeating the First Men in the Battle of the Seven Stars.[14] As such, the Arryns are one of the oldest lines of Andal nobility in the Seven Kingdoms. The Arryns ruled as Kings of Mountain and Vale for approximately six thousand years. Those First Men who did not accept Andal rule fled into the Mountains of the Moon, becoming the mountain clans.[14]

Following the Rape of the Three Sisters two thousand years ago, the Vale warred with the north for a thousand years.[15] The Wolf's Den was besieged by Osgood Arryn and burned by the Talon during the War Across the Water between the two kingdoms.[16] The Three Sisters swore fealty to the Arryns, although their loyalty remains tenuous.[15] The Bloody Gate withstood three attempts by Halleck Hoare, King of the Isles and the Rivers, to conquer the Vale.[17]

The Arryns bent the knee to Aegon the Conqueror during House Targaryen's Wars of Conquest, bringing the Vale under the control of the Iron Throne.[9]

During the Dance of the Dragons, Jacaerys Velaryon gained the Vale for the cause of the blacks.[18] In 134 AC, a war of succession arose in the Vale after the death of Lady Jeyne Arryn between her chosen heir, Ser Joffrey Arryn, a closer cousin, Ser Arnold Arryn, and the head of House Arryn of Gulltown, Isembard Arryn, with the Crown ruling Jeyne's testament should be upheld, and sending a force to maintain the King's Peace.[19]

Robert's Rebellion began in the Vale, when Lord Jon Arryn, Defender of the Vale, refused to surrender his wards, Lords Robert Baratheon and Eddard Stark, to King Aerys II Targaryen. Robert aided Jon in defeating his royalist bannermen at Gulltown, allowing Robert to sail home to the stormlands.[15] Meanwhile, Eddard crossed the Mountains of the Moon to the Fingers, from which he sailed to the Bite and then returned home to the north.[15] Lord Arryn went on to help Robert secure the Iron Throne, and was named his Hand after the war.[22] In Jon's absence, Nestor Royce has governed as High Steward of the Vale.[6] 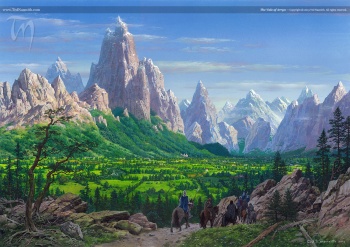 Vale of Arryn by Ted Nasmith ©

After Lord Jon Arryn's sudden death in King's Landing, his widow Lysa flees with their son, Lord Robert Arryn, to the Eyrie.[23] Her sister, Catelyn Stark, abducts Tyrion Lannister at the crossroads inn[24] and brings her captive to Lysa in the Vale instead of Winterfell,[6] which leads Lord Tywin Lannister to begin warfare in the sisters' homeland of the riverlands.[25][26]

Tyrion recruits Vale mountain clansmen while taking the high road to the riverlands, promising them weapons and armor[27] so they can threaten the Vale.[28]

Lysa refuses to lend the Vale's strength to any side of the War of the Five Kings.[29][30] Petyr Baelish reports to the small council that mountain clansmen have been raiding from the Mountains of the Moon, in greater numbers and with better weaponry than normal.[29]

After the death of King Joffrey I Baratheon, Petyr Baelish helps Sansa Stark escape King's Landing[31] and brings her to the Vale. Lysa marries Petyr at his tower at the Fingers.[32] Sansa, using the name Alayne Stone,[32] accompanies Petyr and her aunt, Lady Lysa, to the Eyrie via Coldwater Burn, Snakewood, Heart's Home, Longbow Hall, Old Anchor, and Ironoaks.[33]

Sandor Clegane attempts to bring Arya Stark, Sansa's sister, from the riverlands to the Eyrie so she can be ransomed by Lysa, but they turn back when a village elder in the mountain foothills warns them of inclement weather, shadowcats, and mountain clans.[34]

After Lysa threatens Sansa and reveals that she and Petyr had poisoned her first husband, Jon Arryn, Petyr pushes Lysa through the Eyrie's Moon Door.[35]

The high road to the Vale is closed by snow.[36]

Petyr rules as Lord Protector of the Vale and the guardian of the orphaned Lord Robert, to the consternation of the Lords Declarant.[12][13] Lord Yohn Royce leads the Lords Declarant in surrounding the Gates of the Moon, but Petyr manipulates them into peace during a parley at the Eyrie.[13] With the onset of winter, Robert's court descends from the Eyrie to the Gates of the Moon.[37]

Lord Davos Seaworth washes up on Sweetsister, but Lord Godric Borrell allows Davos to continue to White Harbor instead of turning him over to Lord Triston Sunderland.[15]

Nobles and knights from the Vale travel to the Gates of the Moon to attend the tourney for the Brotherhood of Winged Knights.[38]

House Arryn of the Eyrie

House Baelish of the Fingers

House Elesham of the Paps

House Royce of the Gates of the Moon

House Sunderland of the Three Sisters

House Tollett of the Grey Glen

House Upcliff of the Witch Isle

Sons of the Mist

Sons of the Tree

It stretched before them to the misty east, a tranquil land of rich black soil, wide slow-moving rivers, and hundreds of small lakes that shone like mirrors in the sun, protected on all sides by its sheltering peaks.[6]

Gunthor: The mothers go hungry, and steel fills more mouths than gold. What would you give us for your lives, Tyrion son of Tywin? Swords? Lances? Mail?
Tyrion: All that, and more, Gunthor son of Gurn. I will give you the Vale of Arryn.[27]

My lords, with your leave, I propose to travel to the Vale and there woo and win Lady Lysa Arryn. Once I am her consort, I shall deliver you the Vale of Arryn without a drop of blood being spilled.[39]

—Petyr Baelish to the small council

The lords of the Vale are numerous. As with any large group, their views vary.[40]