Valyria
Slaver's Bay and the location of Valyria 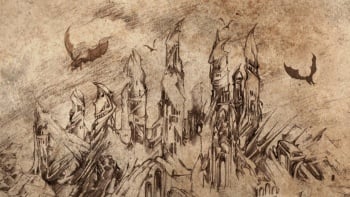 Topless towers of Valyria, from Game of Thrones

Valyria, also called Old Valyria, is a ruined city in Essos. It is a long-dead city of wonderment, and was once the capital of a great empire called the Valyrian Freehold. It was destroyed by a cataclysmic event known as the Doom of Valyria a century before Aegon's Landing. It is the ancestral home of House Targaryen, House Celtigar, and House Velaryon.[1]

Valyria was on the Valyrian peninsula, which extended into the Summer Sea.[2][3] The Doom of Valyria shattered the peninsula, separating the city of Valyria from the Lands of the Long Summer by the Smoking Sea. The city of Valyria is at the center of the largest surviving island, surrounded by cliffs where the island has broken away from the mainland. Valyria was connected by dragon roads to surrounding cities, such as Tyria.[4]

Valyria is said to have had topless towers[5] and used sphinxes as decorations.[6]

A common racial characteristic among Valyrians appears to have been purple eyes and hair of silver-gold or platinum white. Valyria is said to still hold many treasures from before the Doom, such as Valyrian steel blades and items of magical power. It is said that the glass candles of Oldtown were brought there from Valyria a thousand years before the Doom.

Valyria was ruled by its dragonlords, led by two score rival houses that contested for power. House Targaryen, however, was not considered a powerful house.[7] At times the lords freeholder elected archons for temporary leadership.[8]

The Valyrians were more than dragonlords. They practiced blood magic and other dark arts, delving deep into the earth for secrets and twisting the flesh of beasts and men to fashion monstrous and unnatural chimeras. It is believed that for these sins the gods in their wroth struck Valyria down.[9]

The Valyrians' empire, the Valyrian Freehold, first conquered the Old Empire of Ghis to the east across Slaver's Bay, and the Ghiscari colonies in the Basilisk Isles and Sothoryos. Seeking slaves for Valyrian mines, they then conquered and established colonies to the west and north after defeating the Andals and the Rhoynar in Essos.

Four hundred years ago, however, Valyria and its peninsula were shattered by the Doom of Valyria.[10] The dragonlord Aurion declared himself Emperor of Valyria, but he and his host disappeared while trying to reclaim the city.[11]

In 55AC, Princess Aerea Targaryen claimed Balerion as her mount, and disappeared for more than a year, before reappearing in King's Landing in 56AC. Grand Maester Benifer and Barth found her to be infested with "horrors" which burned her from the inside out and killed her, erupting from her body as "worms with faces", "snakes with hands" and other monstrosities. Balerion was also found to bear wounds and scars seemingly received during their absence. These observations led Barth to the conclusion that Balerion, uncontrollable by an inexperienced rider such as Aerea, flew her to his original home of Valyria, where he was born before the Doom and the flight of the Targaryens; these "horrors" that infested Aerea, he supposed to be remnants of Valyrian experiments with blood magic. After these events it was declared forbidden for any ship suspected to have visited Valyria to dock in Westeros, or for any inhabitant of Westeros to travel to Valyria.[12]

Some years ago Gerion Lannister journeyed to Valyria to try to recover Brightroar, the lost Valyrian steel sword of House Lannister, and any other treasures that might have survived the Doom. He did not return and was presumed lost at sea.[13] At some point the tigers, a political party in Volantis, sent a fleet to reclaim Valyria, but the ships vanished in the Smoking Sea.[14]

Euron Greyjoy claims to have visited Valyria and recovered the dragon horn Dragonbinder,[15] but Lord Rodrik Harlaw is skeptical of Euron's boasting.[16]

Petyr: Is there a man in your service that you trust utterly and completely?


Petyr: In that case, I have a delightful palace in Valyria that I would dearly love to sell you. The wiser answer was no, my lord, but be that as it may.[17]
—Petyr Baelish and Eddard Stark

Euron: I am the storm, my lord. The first storm, and the last. I have taken the Silence on longer voyages than this, and ones far more hazardous. Have you forgotten? I have sailed the Smoking Sea and seen Valyria.


Euron: Reader, you would do well to keep your nose in your books.[16]
—Euron Greyjoy and Rodrik Harlaw

Moqorro: The sky is always red above Valyria, Hugor Hill.


Tyrion: Are we close?
Moqorro: Closer than the crew would like. Do you know the stories, in your Sunset Kingdoms?


Tyrion: I know some sailors say that any man who lays eyes upon that coast is doomed.[18]
—Moqorro and Tyrion Lannister

At its apex Valyria was the greatest city in the known world, the center of civilization. Within its shining walls, twoscore rival houses vied for power and glory in court and council, rising and falling in an endless, subtle, oft savage struggle for dominance.[7]

It's safe to say that the Targaryens were the only nobles with dragons who escaped the destruction of Valyria.[19]