Ser Vardis Egen is a knight of House Egen and captain of the household guard at the Eyrie. He has at least one young son.[4] In the television adaptation Game of Thrones he is played by Brendan McCormack.[5]

Vardis is stocky and silver haired.[6] He has a square, plain face.[7]

Vardis wears a sky-blue cloak and hammered moon-and-falcon breastplate while on guard duty.[6] When prepared for combat, however, the knight wears heavier steel, including plate over mail and padded surcoat. Vardis also dons a skirt of lobstered metal, gauntlets, and a solid gorget. His rondels are enameled cream-and-blue in the moon-and-falcon sigil of House Arryn. The temples of Vardis's helm are decorated with falcon's wings, and his visor is a pointed metal beak. The knight's triangular shield, near four feet tall, is heavy oak studded with iron. He wields a sword.[3]

During Lord Jon Arryn's tenure as Hand of the King at King's Landing, Vardis served as his captain of the guards.[6]

Lord Robert Arryn and his mother, Lady Lysa Arryn, returned to the Vale of Arryn after Jon's death in the capital. Robert played with Vardis's son and the sons of the steward of the Eyrie, but Lysa sent them away, judging them too rough with her son.[4]

Ser Vardis greets Lady Catelyn Stark upon her arrival at the Eyrie, and Lady Lysa Arryn has him take Tyrion Lannister to the sky cells.[6]

The captain is present when Tyrion demands a trial by combat to demonstrate his innocence in the death of Lord Jon Arryn. Vardis is chosen as the champion for House Arryn by Jon's widow, Lysa. He wields Jon's silver falcon sword and is dressed in plate over mail. The heavy armor makes Vardis slow and clumsy, however, and Bronn, Tyrion's champion, tires him during their duel. After Bronn pushes the statue of Alyssa Arryn on top of Vardis, the sellsword kills the defenseless knight with his sword.[3] Lysa reluctantly allows Tyrion and Bronn to depart the Vale on the high road.[8]

Tyrion mentions Vardis when introducing Bronn to Ser Mandon Moore of the Kingsguard in King's Landing.[10] 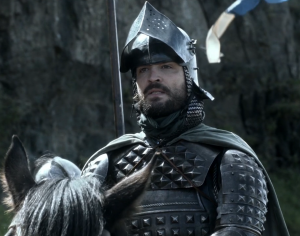 Brendan McCormack as Vardis in Game of Thrones

Lysa: Ser Vardis Egen, you were ever my lord husband's good right hand. You shall be our champion.
Vardis: My lady, pray give this burden to another, I have no taste for it. The man is no warrior. Look at him. A dwarf, half my size and lame in the legs. It would be shameful to slaughter such a man and call it justice.[7]

For the Eyrie and the Vale![3]

Tyrion remembered him well from the years he had spent at King's Landing as the captain of the Hand's household guard. A square, plain face, silver hair, a heavy build, and no humor whatsoever.[7]

Eon: Ser Vardis is a doughty fighter. He will make short work of the sellsword.
Catelyn: Will he, my lord? I wonder.[3]

Vardis Egen on the Game of Thrones wiki.