Princess Viserra Targaryen was the tenth-born child of King Jaehaerys I Targaryen and Queen Alysanne Targaryen.[2][1]

Viserra was the most beautiful of Queen Alysanne Targaryen's daughters. She had deep purple eyes and silver-gold hair, flawless white skin, and fine features.[1]

Viserra was a vain girl. Once, when a young squire called her a goddess, she simply agreed with him. The attention of great lords, famous knights, and callow boys fed her vanity until it "became a raging fire". Viserra delighted in playing one boy off against another and setting them on foolish quests or having them perform contests.[1]

Viserra was a wild, high-spirited girl.[3] She was described as sly, and had a grace that was uncanny and unsettling in someone as young as she was.[1]

According to Alysanne, Viserra desired to become a queen, and therefore aimed to marry her brother Baelon, not for love but for ambition.[1] 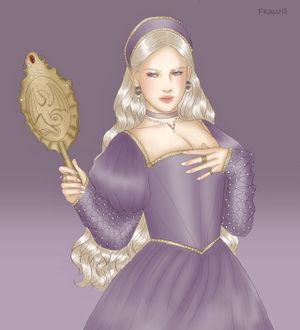 Viserra was born to King Jaehaerys I Targaryen and Queen Alysanne Targaryen in 71 AC. She was their tenth child and sixth daughter.[1]

In 73 AC, after Viserra's brother Vaegon had refused their sister Daella as a bride, Viserra and her older sister Saera were briefly considered as a potential spouse for Vaegon. However, Saera was only six years old and Viserra two, and Vaegon had never looked at either of them. As such, the notion was rejected.[1]

According to Alysanne, Viserra aimed to become a queen and had her eye set on her fourteen-year older brother, Baelon, who had been a widower since the death of his sister-wife Alyssa two years before. Viserra saw no reason as to why she could not be wed to an older brother. Queen Alysanne, however, was determined to prevent such a marriage, and betrothed the fifteen-year old Viserra in 86 AC to Theomore Manderly, Lord of White Harbor. Viserra was not excited about the marriage, as Theomore had grown very stout during his life and had been widowed four times already. Viserra first turned to her father for help, but Jaehaerys agreed with the match and refused to interfere. Viserra then turned to Baelon, hoping for him to rescue her according to court gossip.[1] One night, she slipped past Baelon's guards and climbed naked into his bed, but Baelon sent the drunk girl away when he arrived.[1]

In 87 AC, not long after the incident with Baelon, as arrangements were being made for Viserra's departure to White Harbor, Viserra traded clothes with one of her maids and escaped her guards. She slipped from the Red Keep for "one last night of laughter" with her companions, two minor lordlings and four young knights. Near midnight the princess and her remaining companions raced back to the Red Keep. At the foot of Aegon's High Hill, Viserra's palfrey collided with the mare of one of her companions. Viserra was thrown from her saddle into a wall, and she died of a broken neck at the age of fifteen.[1]

She has no interest in kissing games, nor boys. She plays with them as she used to play with her puppies, but she would no more lie with one than with a dog. She aims much higher, our Viserra. I have seen the way she preens and prances around Baelon. That is the husband she desires, and not for love of him. She wants to be the queen.[1]