War of the Wombs

The War of the Wombs was the name used by Lord Toad, a fool at Casterly Rock, to describe the fierce rivalry between Lady Ellyn Reyne and Lady Jeyne Marbrand.[1] 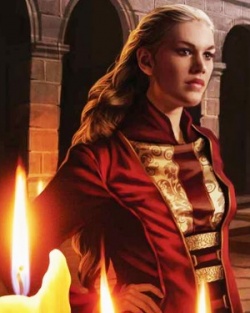 Lady Ellyn Reyne had been betrothed for years to Tywald Lannister, the eldest son, and heir to Lord Gerold Lannister of Casterly Rock. However, Tywald died in 233 AC, fighting in the Peake Uprising. Ellyn had anticipated becoming the Lady of Casterly Rock for a long time and was not willing to give up on that dream, so she turned to Tywald's twin brother, Tion Lannister, and convinced him to break his own betrothal, to a daughter of Lord Rowan, and take her as his betrothed instead.[1]

While Lord Gerold Lannister was opposed to the match, he consented in the end. Thus, in 235 AC, Ellyn and Tion were married in a double ceremony, while Tion's younger brother Tytos married Lady Jeyne Marbrand. Due to his health and his status as a widower, Ellyn, as the wife to the heir to Casterly Rock, became the Lady of Casterly Rock in all but name. The influence of the Reyne's at Casterly Rock grew, until Tion's death in 236 AC, whilst fighting in the Fourth Blackfyre Rebellion.

Ellyn's influence at Casterly Rock ended with Tion's death. According to a semi-canon source, Ellyn made a final attempt to cling to power by claiming to be pregnant with Tion's child. This was eventually revealed to be a lie.[2]

Ellyn was allowed to remain at Casterly Rock, though her brothers returned to Castamere.[1] According to a semi-canon source, singers began to favor Tytos Lannister's wife Jeyne Marbrand, who had grown into a great beauty.[2] A rivalry between Jeyne and Ellyn began. According to Maester Beldon, Ellyn attempted to bed Tytos in 239 AC, but was so intimidating that Tytos was unable to perform. He went to his wife and confessed, and whilst Jeyne forgave her husband, she went to her good-father, Lord Gerold, and informed him of what happened. In response, Gerold married Ellyn off within a fortnight to the fifty-five-year-old Lord Walderan Tarbeck of Tarbeck Hall, twice widowed with several grown sons of his own.[1]

War of the Wombs

Ellyn would remain forever unwelcome at Casterly Rock. Following Lord Gerold's death in 244 AC, Tytos inherited the rule of the westerlands, but was an ineffectual ruler, with a desire to be liked by all. As such, Ellyn's brothers managed to loan great sums of money from House Lannister, which was given to Ellyn, who used the money to restore the ancient but impoverished House Tarbeck. Both the Reyne's and Tarbeck's rose in power due to Tytos's weak rule.[1]

Tensions between the Reynes, Tarbecks, and Lannisters would remain, until it came to a head in 261 AC, when Ser Tywin Lannister demanded all loans given out by Casterly Rock to be repaid. Lord Walderan Tarbeck refused, and traveled to Casterly Rock to negotiate, upon which Tywin arrested him. In response, Ellyn took two Lannisters of Lannisport and Stafford Lannister of Casterly Rock captive, and demanded the return of her husband. Late that same year, Ser Tywin summoned Lord Roger Reyne, his brother Ser Reynard, Lord Walderan Tarbeck, and Lady Ellyn Reyne to Casterly Rock, so they could answer for their crimes. Both Houses Reyne and Tarbeck refused, and rose in revolt, beginning the short-lasting conflict known as the Reyne-Tarbeck revolt.[1]