From A Wiki of Ice and Fire
(Redirected from Water Tower)
Jump to: navigation, search

The Twins
The riverlands and the location of the Twins 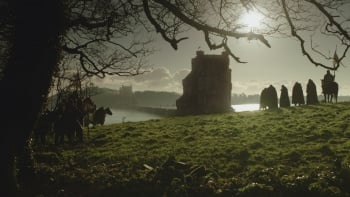 The Twins in Game of Thrones

The Twins, sometimes known as the Crossing, is the seat of House Frey in the northern riverlands. It is a fortified crossing of the Green Fork of the Trident and consists of two identical castles and a tower in the middle of their bridge.[1] It is one of the most formidable strongholds of the Seven Kingdoms.[2]

Brenett serves as the castles' maester[3] and Lame Lothar, one of Lord Walder Frey's sons, is the steward.[4] Jinglebell, one of Walder's grandsons, entertains as a fool,[3] and Sedgekins is a servant.[5]

The Twins consist of two identical stone castles standing on a margin of the Green Fork of the Trident. They have high curtain walls, deep moats, and a barbican and portcullis in each.[1] Channels have been dug to form moats, turning each castle into an island.[3] An apple orchard and a cornfield are near the eastern castle.[5]

A stone bridge arches between the castles, with the bridge footings rising from within the inner keeps. This bridge is wide enough for two wagons to cross abreast. It is the only crossing point over the Green Fork for hundreds of miles in either direction, from the north to the western riverlands. It lies directly athwart the main route from Winterfell to Riverrun.[1]

The bridge is guarded in the middle by the Water Tower. This structure has arrow slits, murder holes, and portcullises for defense.[1] Guests of honor can reside in its chambers and at least one suite, and their featherbeds have corner posts carved in the shape of towers.[3]

The seat of the Lord of the Crossing, located in the great hall of the east castle, is a massive chair of black oak. Its back is carved in the shape of two towers joined by an arched bridge.[1][3]

The Freys have held the crossing of the Green Fork for six hundred years, beginning when a petty lord built a rickety wooden bridge over the narrowest portion of the river.[2] It took the family three generations to complete the bridge in stone, after which they built timber keeps on each bank of the river.[1] Since then, the Freys have grown wealthy by charging a heavy toll on all those who need to cross - a fact which irks many older or more powerful houses. The timber keeps have since been replaced by stone. These castles are what give the stronghold its name, for they are identical.[1] Given their strong castle, strategic location, wealth, and numbers, the Freys are one of the most powerful bannerhouses sworn to House Tully, now able to raise about four thousand men.[6]

During the Dance of the Dragons, Lady Sabitha Frey fled back to the Twins after Prince Aemond Targaryen attacked Harrenhal with Vhagar.[7] Sabitha later joined the host of Ser Addam Velaryon for the Second Battle of Tumbleton.[8] Widow Fairs were held at the Twins after the war.[9]

In the story of the Knight of the Laughing Tree, a crannogman passed the Twins by night to avoid being attacked by the Freys.[10]

Walder Frey, Lord of the Crossing, claims to have hosted three kings during his life.[1]

After Catelyn Stark seizes Tyrion Lannister at the crossroads inn,[11] a contingent of Freys report back to Lord Walder Frey.[12] Hoster Tully, the Lord Paramount of the Trident, is ill and does not attend the wedding of Walder and Joyeuse Erenford.[1]

The northern army of Robb Stark marches to the Twins, where Lord Walder has gathered nearly four thousand soldiers. Catelyn negotiates an alliance between House Stark and House Frey, with Robb promising to marry one of Walder's daughters and Arya Stark to marry a son.[1] The Freys contribute one thousand mounted knights and near three thousand foot to Robb's cause.[6]

The army splits at the Twins, with Robb crossing to the west bank of the Green Fork to take the horse to Riverrun and Lord Roose Bolton keeping the foot to distract Lord Tywin Lannister on the east bank. Ser Helman Tallhart remains with four hundred archers and swordsmen to bolster and ensure the loyalty of Walder's garrison of the same size.[1]

After being defeated by Tywin in the battle on the Green Fork, Roose reforms the survivors at the mouth of the causeway.[13]

Having gathered his host to the Twins,[14][15] Roose Bolton marries[16] Walda Frey,[17] one of Lord Walder's granddaughters.[18] Roose marches south and takes the ruby ford and the crossroads, after which Edmure Tully orders Helman Tallhart to leave the Twins and assist Roose with capturing Harrenhal.[16]

Lords Tytos Brax and Regenard Estren are held captive at the Twins after the battle in the Whispering Wood.[19][20]

After learning that Robb Stark, King of the Trident, has married Jeyne Westerling instead of a Frey, Ser Ryman Frey leads the Frey soldiers in Robb's army back to the Twins.[6] In order to regain the Freys for Robb's cause, Edmure Tully agrees to marry Roslin Frey.[4]

After arriving from Riverrun, Edmure, Robb, and Catelyn are given guest chambers in the Water Tower and three great feast tents are set up on the eastern bank for Robb's men. Roose arrives from Harrenhal with the remainder of the northern foot, with Ser Aenys Frey having already returned with his Frey contingent.[3] The highborn nobles feast in one of the Twins, while knights, lesser lords, and bastards eat in the opposing castle. During this wedding feast, however, the Freys and Boltons betray the Starks and Tullys in the massacre known as the Red Wedding.[18][21]

As a reward from the Iron Throne for the Red Wedding, the Freys are to receive Riverrun.[22] Ryman leads two thousand spears from the Twins to support the siege of Riverrun.[23]

Ser Arwood Frey and the brothers Harys and Donnel Haigh lead fifty men from the Twins to investigate the raid on Saltpans.[24] Lord Walder sends men to hunt the Hound.[25]

Ryman's tent outside Riverrun is decorated to resemble the Twins.[26] While riding back to the Twins from Riverrun, Ryman and his party of three knights and twelve men-at-arms are ambushed by the brotherhood without banners. Ser Jaime Lannister tells Edwyn Frey and Ser Walder Rivers that all captives from the Red Wedding held at the Twins are to be sent to King Tommen I Baratheon in King's Landing.[27]

Roose Bolton marches from the Twins to Moat Cailin via the causeway. His vanguard consists of four hundred mounted Freys led by Ser Aenys Frey and Ser Hosteen Frey, while the rearguard consists of at least another thousand Frey troops.[28]

The pregnant Roslin Frey is to remain at the Twins until she gives birth, after which she and the newborn may join the captive Edmure at Casterly Rock.[29]

Chapters that take place at the Twins 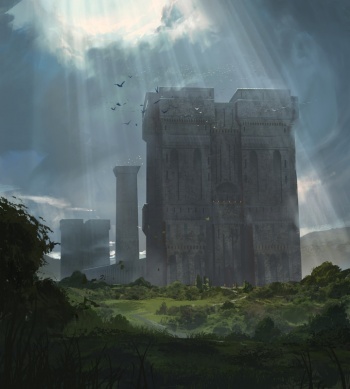 The Twins—two squat, ugly, formidable castles, identical in every respect, with the bridge arching between—had guarded the crossing for centuries.[1]

The gatehouse towers emerged from the rain like ghosts, hazy grey apparitions that grew more solid the closer they rode. The Frey stronghold was not one castle but two; mirror images in wet stone standing on opposite sides of the water, linked by a great arched bridge.[3]

In the Twins, you learned early that only full blood siblings could be trusted, and them not very far.[30]

The world won't miss a few Freys. There's plenty more down at the Twins should we ever have need of one.[31]

Walder Frey's fourth wife was a Blackwood, but kinship counts for no more than guest right at the Twins.[29]