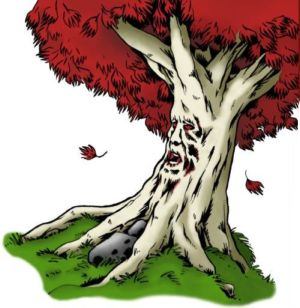 Weirwood is a species of deciduous trees found in Westeros, now found most commonly in the north and beyond the Wall.

The five-pointed leaves and the sap of weirwoods are blood-red, while the smooth bark on their wide trunks[1] and wood are bone white.[2] Most weirwoods have faces carved into their trunks. This was done by the children of the forest in ancient days, and is now done by the free folk as well as other descendants of the First Men, such as followers of the old gods in the Seven Kingdoms praying to heart trees in godswoods. In some cases sap has collected in the crevices of the carved faces, giving the trees red eyes which have been known to drip sap as if the trees were weeping.[1] A weirwood will live forever if undisturbed.[3] 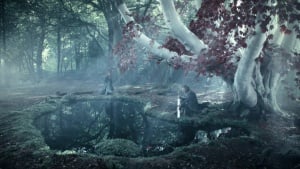 Godswood of Winterfell in Game of Thrones

Weirwoods are considered sacred to the followers of the old gods, and children of the forest believe weirwoods are the gods.[4] The greenseers of the children of the forest can see through the eyes of weirwoods with carved faces. Since trees have no sense of time, the greenseer can see into the past or present when looking through the eyes of a tree.[3]

Weirwoods are used to bear witness to important ceremonies such as marriages and oaths, since followers believe that the old gods watch through the faces.[1] It said that it is impossible to lie in the presence of a heart tree. Thousands of years ago, the entrails of the condemned were sometimes placed in the branches of weirwoods.[5][6] The Skagosi allegedly still maintain this practice.[7] The ironborn believe the demon tree Ygg had pale wood and fed on human flesh, suggesting a possible connection with weirwoods.[8]

The Night's Watch uses a grove of nine weirwoods in the haunted forest half a league from Castle Black as a godswood when necessary.[1] 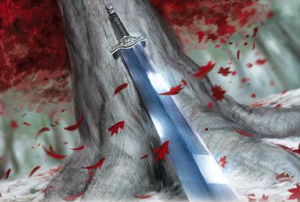 The wood of the weirwood is an excellent, though expensive,[9] building material because it does not rot.[10] Weirwood can be used for making bows, spears, and arrows; Ygritte and Brynden Rivers both have horn and weirwood bows, and the children of the forest are said to have used weirwood bows.[11][12][13] Styr has a long bronze and weirwood spear.[14]

Weirwood can also be used to make furniture. The meeting table of the Kingsguard in the Red Keep is made of white weirwood fashioned into the shape of a shield and supported by three white stallions.[15] At the Eyrie, the throne of House Arryn as well as their Moon Door are carved out of weirwood.[16] Weirwood is used in the Black Gate of the Nightfort and the rafters of Harrenhal[17] and Whitewalls.[9] The Bower was made entirely of weirwood.[18]

One of the main doors of the House of Black and White in Braavos is made of weirwood, with the other made of ebony. Its chairs are also made of the two materials. Tobho Mott's shop in King's Landing has doors carved out of weirwood and ebony showing a hunting scene.[19] In the House of the Undying, the doors of the room with the "splendor of wizards"—a mirage depicting the Undying Ones in their prime—are made of weirwood and ebony.[20] 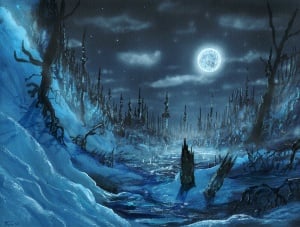 Weirwoods once grew throughout Westeros, although they never took to the thinner soil of the Iron Islands.[25] The children of the forest are said to have carved faces in weirwoods during the Dawn Age, before the coming of the First Men from across the narrow sea. There are still weirwood circles from the children in the high places of Sea Dragon Point.[26]

The First Men arrived in Westeros by crossing the Arm of Dorne, and began to farm the land and build ringforts and villages, cutting down forest to do so, including the carved weirwoods.[27] This caused the children of the forest to attack them, leading to war.[27] The First Men feared that the children's greenseers could look through the eyes carved into the trees, and so continued to cut down many weirwood trees and groves with their bronze axes.[28] During the conflict, the First Men made wooden and stone forts, in one case going so far as to build a timber castle entirely from weirwood, called the Bower.[29] Eventually, the two sides fought one another to a standstill, and agreed a Pact at the Isle of Faces, in which the children would leave the land to the First Men, except for the deep forests, while the First Men would no longer cut down the weirwoods. In commemoration of this, all the weirwoods on the Isle were carved with faces so that the gods could witness the Pact, and the green men were formed to protect the Isle and tend to its weirwoods.[27] After the First Men took up the faith of the old gods they created godswoods within their castle walls and villages where a single weirwood, known as a heart tree, was planted so the gods could be worshiped.

With the invasion of Westeros by Andals came the Faith of the Seven, which viewed the old gods as little more than demons.[30] Some First Men allied with children of the forest, such as the Weirwood Alliance in the Stormlands,[31] and the defenders of the sacred grove of High Heart against Erreg the Kinslayer, who left only the stumps of the thirty-one ancient weirwood trees that had crowned this holy site.[32][30] Despite this, the Andals eventually conquered most of Westeros except the North, cutting down or burning the weirwoods as they went, and hacking out their carved faces.[30] Once the fighting died down though, the Andal kings sought to consolidate their victories and prevent further bloodshed on the basis of religion, and so kept the weirwoods in their castles' godswoods.[32]

In most of Westeros, the wild weirwoods had been cut or burned down by around 700 BC,[2] except for on the Isle of Faces where the children and the First Men agreed to the peace. As the Andals never conquered the North, the worship of the old gods remains strong there. Weirwoods still grow in the forests of the North, and are prevalent beyond the Wall. 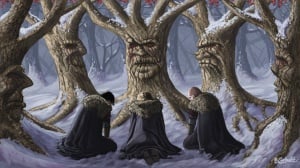 Jon Snow and Samwell Tarly say their Night's Watch vows at a weirwood grove in the haunted forest.[1] 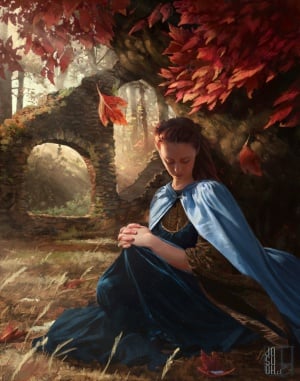 Sansa Stark sitting by a weirwood - by Josu Hernaiz ©

Jon Snow sees an enormous weirwood with a gaping mouth growing in the village of Whitetree beyond the Wall with a trunk that is eight feet wide.[33]

Arya Stark prays before the weirwood in the Harrenhal godswood before the Fall of Harrenhal.[34]

Bran Stark learns of the Knight of the Laughing Tree, a mystery knight whose shield bore a weirwood heart tree with a laughing face.[35]

Arya Stark sees weirwood roots growing throughout the hollow hill in the riverlands.[36]

Brienne of Tarth discovers a slender young weirwood at the ruins of the Whispers. She buries Dick Crabb beneath the tree after he is killed by Shagwell.[37]

Varamyr Sixskins, a skinchanger not known to be a greenseer, can see through the eyes of a carved weirwood briefly as he is dying.[38]

The queen's men burn "Mance Rayder" in a wooden cage made from various trees, including weirwoods. The queen's men give weirwood branches to free folk who submit to Stannis Baratheon so the wood can feed the pyre, symbolizing their acceptance of R'hllor.[39]

Bran travels to the cave of the three-eyed crow beneath a great weirwood north of the Wall. He observes weirwood roots in the cave.[40] Snowylocks feeds Bran a paste of weirwood seeds from a carved weirwood bowl.[3]

Lord Tytos Blackwood desires to bury the bones of his son Lucas, killed in the Red Wedding, beneath the great dead heart tree of Raventree Hall.[10]

You will find a grove of weirwoods half a league from this spot, and mayhap your gods as well.[1]

The old gods have no power in the south. The weirwoods there were all cut down, thousands of years ago.[1]

The singers of the forest had no books. No ink, no parchment, no written language. Instead they had the trees, and the weirwoods above all. When they died, they went into the wood, into leaf and limb and root, and the trees remembered. All their songs and spells, their histories and prayers, everything they knew about this world. Maesters will tell you that the weirwoods are sacred to the old gods. The singers believe they are the old gods. When singers die they become part of that godhood.[3]

Time is different for a tree than for a man. Sun and soil and water, these are the things a weirwood understands, not days and years and centuries. For men, time is a river. We are trapped in its flow, hurtling from past to present, always in the same direction. The lives of trees are different. They root and grow and die in one place, and that river does not move them. The oak is the acorn, the acorn is the oak. And the weirwood ... a thousand human years are a moment to a weirwood, and through such gates you and I may gaze into the past.[3]