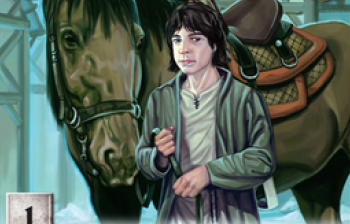 Wex Pyke is the bastard son of Sargon Botley of Lordsport. He was born mute.[2]

Wex has a tangle of dark brown hair with an almost feral face. He has a wide mouth, a sharp nose and a pointed chin. He learns quickly and is adept with daggers.[3]

Wex becomes the squire of Theon Greyjoy as part of the deal that Theon strikes to buy a horse, Smiler, from Lord Sawane Botley of Lordsport.[2] Wex recognizes Asha Greyjoy when she claims to be "Esgred" and embarrasses her brother, and Theon strikes the boy for smirking.[2]

Wex participates in the harrying of the Stony Shore,[4] and later in the capture of Winterfell. He sleeps below the foot of Theon's bed in Winterfell. When Bran and Rickon Stark disappear, Wex is part of the search party and he surprises a vixen at a stream. He claps his hands to point out that they are now only seeing wolf prints and not Hodor's tread, and Theon thinks the search party has been tricked. Theon sends Wex back to Winterfell before he goes to the Acorn Water mill with Aggar, Gelmarr, Gynir, and Reek.[5]

Wex is frightened by Theon's nightmares.[6] The boy is the first to stand alongside Theon when Ser Rodrik Cassel's northmen come to retake the castle.[7] Reek, actually Ramsay Snow, attacks the northmen in a battle at Winterfell and then has the castle burned.[7]

Wex survives the sack of Winterfell by climbing the heart tree in the godswood, and he witnesses the departure of Bran and Rickon Stark along with their direwolves and companions. He follows Rickon, Osha, and Shaggydog, learning they are abandoning the mainland and crossing the Bay of Seals to Skagos. Eventually falling into Manderly control, Wex is taken to White Harbor, where they realize he is not unintelligent, only mute. They begin to teach him his letters, asking only yes or no questions, and he uses chalk to draw pictures. Lord Wyman Manderly and Robett Glover learn the truth of the sack of Winterfell, and Wex repudiates Ramsay's claim of Theon being to blame.[3]

After Davos Seaworth is captured and his execution is faked, Wex is introduced to Davos in the New Castle, and Davos finds that Wex's eyes look older than the boy's actual age. Wex reveals the location of Rickon by throwing Robett's dagger at Skagos[8] on Wyman's map. Lord Manderly tasks Davos with retrieving Rickon.[3]

Most squires have loose tongues, but Wex had been born dumb ... which didn't seem to keep him from being clever as any twelve-year-old had a right to be.[2]

That's for enjoying this so much. And that's for not warning me. Next time, grow a tongue.[2]

We may never know all that happened at Winterfell, when Ser Rodrik Cassel tried to take the castle back from Theon Greyjoy's ironmen. The Bastard of Bolton claims that Greyjoy murdered Ser Rodrik during a parley. Wex says no. Until he learns more letters we will never know half the truth ... but he came to us knowing yes and no, and those can go a long way once you find the right questions.[3]