From A Wiki of Ice and Fire
Jump to: navigation, search
For other uses, see Will (disambiguation).

Will is a ranger of the Night's Watch. He is the POV character for the prologue of A Game of Thrones.[1] In the television adaptation Game of Thrones he is portrayed by Bronson Webb.[2]

See also: Images of Will

Will is a good climber. He is older than Ser Waymar Royce but younger than Gared.[1]

Will had been a poacher before joining the Night's Watch, hunting in House Mallister's woods. After Lord Mallister's freeriders caught him skinning a buck, Will choose to taking the black instead of losing a hand.[1]

During his first ranging, a scared Will remembered old stories he had heard about the lands beyond the Wall. At the start of A Song of Ice and Fire, however, he has already been in the Night's Watch for four years and is a veteran of a hundred rangings. Will's stealth and hunting experience proved useful for scouting as a ranger.[1]

Shortly before the series starts, Will, Gared, and Ser Waymar Royce were sent ranging into the haunted forest by Jeor Mormont, Lord Commander of the Night's Watch, in search of a band of wildling raiders. Jeor gave the command to Waymar, although he was the least experienced of the three, whereas Jeor counted Gared and Will among his best men. However, Waymar felt it was his due to have a command because he was a knight, and the Lord Commander accepted because he did not want to offend Waymar's father, Lord Yohn Royce.[3] 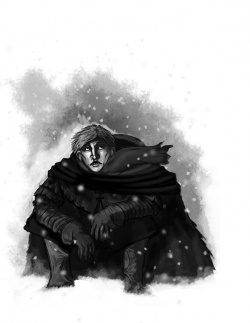 Will, Gared and Ser Waymar Royce follow the wildlings, catching up with them the ninth day. Will sees eight people, men and women, at their camp, but is not able to see any movements over an extended period of time. He returns to Waymar and Gared, reporting that the wildlings were dead, probably killed by the cold. Gared wants to return to the Wall, but Waymar insists they discover what killed the wildlings.

Waymar orders Gared to remain with the horses while he and Will walk the last part. They cannot find the bodies at the wildling camp, so Will climbs a tree to look for them. Both men feel that it becoming markedly colder. Suddenly, Waymar is attacked and killed by Others, but Will stays in the trees until he is sure that the Others have left. When Will descends, however, he is attacked and killed by Waymar, who has been turned into a wight.[1] South of the Wall, Gared is later executed for desertion by Lord Eddard Stark.[4]

While Lord Commander Jeor Mormont tells Tyrion Lannister about the conditions on the Wall, he mentions the ranging on which Will and Waymar went missing. Jeor laments giving the command to someone as inexperienced as Waymar.[3]

Craster tells Jeor that the three rangers stopped at Craster's Keep during their search for raiders.[5] Bronson Webb as Will in Game of Thrones

In the television series Game of Thrones the roles of Gared and Will are swapped. Gared is beheaded by a White Walker and Will flees south until he is captured and executed as a deserter.[6]