Ygritte is a spearwife of the free folk. She is a member of Rattleshirt's war band.[2] In the television adaptation Game of Thrones she is portrayed by Rose Leslie. 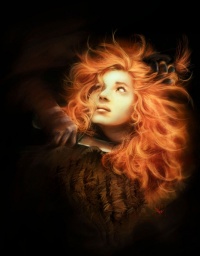 Ygritte has a round face, crooked white teeth, small hands, and a pug nose.[3] She has pretty blue-grey eyes which Jon Snow thinks are too far apart.[4] Her legs are skinny but well muscled.[5] Jon, who is three years younger and half a foot taller,[4] thinks Ygritte is short for her age.[3]

Ygritte's most distinctive feature is her thick, shaggy mop of curly bright red hair.[3][4][6][7] Free folk consider red hair to be lucky and describe those with it as having been "kissed by fire," and they consider Ygritte a great beauty.[4] Although he finds her features unconventional, Jon sees Ygritte as pretty, especially when she smiles.[5][8]

The spearwife wears layers of fur and wool and leather,[3] a doeskin shirt[5] and a sewn sheepskin helm.[10] Ygritte wields axe[11] and bone dagger[4] but prefers a short curved bow of horn and weirwood.[4] She fletches her arrows with pale grey goose feathers.[6]

Ygritte learned the song of Bael the Bard from her mother.[3]

Ygritte came from the same village as Longspear Ryk, whom she regards as a brother. Ygritte lost her maidenhead to a red-haired youth at a feast five years ago, but she was unimpressed with her lover. When the lover returned, Longspear broke his arm and chased him off.[5] 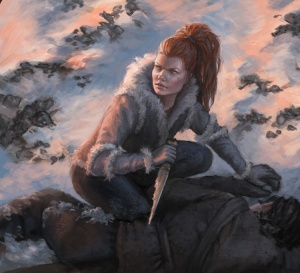 Ygritte is part of Rattleshirt's band of free folk in the Skirling Pass. Qhorin Halfhand, the leader of a scouting party of the Night's Watch, sends Stonesnake and Jon Snow to ambush wildlings they have spotted. Her companions, Orell and another man, are slain, but Ygritte is spared as Jon balks at killing a woman. She yields, but only offers minimal information. As they wait for Qhorin's arrival, Jon reveals he is Eddard Stark's bastard. Ygritte tells the story of Bael the Bard, a song which insinuates that House Stark has wildling blood as well. Jon scoffs at this idea, calling Bael a liar, but Ygritte shrugs it off. The wildling is brought to the Halfhand, who instructs Jon to do what must be done with her. Ygritte suggests that Jon desert and join Mance Rayder, the King-Beyond-the-Wall, but Jon refuses. Presuming that Qhorin had ordered him to kill her, Jon nevertheless lets Ygritte escape.[3] After she disappears, Qhorin reveals he had placed her fate in Jon's hands to see what the youth would do.[11]

Ygritte rejoins Rattleshirt's band.[10] After Ghost, Jon's direwolf, is attacked by Orell's eagle, Qhorin decides that the black brothers should retreat.[11] After Dalbridge, Ebben, and Stonesnake are killed or disappear, Jon and Qhorin are surrounded by the wildlings. Ygritte is present when Jon, under Qhorin's implicit command, slays the Halfhand and purports to turn his cloak. Although Rattleshirt wants to kill Jon, Ygritte and the other wildlings spare his life.[10] 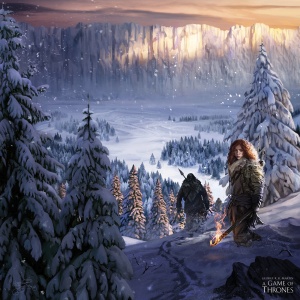 Ygritte takes the hooded cloak of Qhorin Halfhand for herself, and Longspear Ryk gives her Qhorin's helm since it does not fit him.[9] After Jon meets with Mance Rayder and convinces him he has turned his cloak in truth,[9] he is told to ride with Tormund Giantsbane.[4] Ygritte follows him to Tormund's company and routinely beds down next to him, though he initially refuses her advances and uses Ghost to keep her away. Tormund explains to Jon that according to free folk culture, he had stolen her by slaying her companions and then sparing her life. Ygritte mocks Jon with "You know nothing, Jon Snow" for the first time when comparing hot and cold baths. Jon listens to Ygritte sing "The Last of the Giants" with Tormund, Ryk, and Tormund's family.[4]

When the wildling band sees the aftermath of the fight at the Fist, Mance is furious with Jon as he did not warn him of the Night's Watch force there. To save Jon, Ygritte lies and tells Mance that the two are sexually involved. This knowledge helps to convince Mance that Jon has turned his cloak in truth. That night, Ygritte seduces him, and the two begin a torrid affair as they march for the Wall.[4]

Ygritte and Jon join Styr's band which is to scale the Wall and attack Castle Black from the south. The night before the ascent between Stonedoor and Greyguard, Ygritte and Jon sleep together in a grotto within a cavern. Ygritte tells Jon the legend of Gendel and Gorne.[5] Ygritte survives the dangerous climb up the hated Wall, and she reveals to Jon that Mance never found the Horn of Joramun.[12]

Styr's party descends at abandoned Greyguard. While traveling through the Gift, Ygritte assumes that mere roundtowers are castles built by kings.[6]

South of the Wall, at Queenscrown, Styr's band capture a lone old man. Styr, suspicious of Jon's loyalties, orders Jon to slay the man. When Jon refuses, Ygritte slits the man's throat instead.[6] In the confusion created by a raging thunderstorm and the sudden emergence of Summer, Bran Stark's direwolf, Jon escapes, despite Ygritte shooting him in the leg with an arrow as he starts to run.[6]

Ygritte continues to Castle Black with Styr's band, but Jon has forewarned the Night's Watch of their arrival. During the attack on Castle Black, Dick Follard falls to his death after being struck by Ygritte's arrow.[13] Along with the rest of the wildling band, Ygritte is killed, mortally wounded by an arrow. Jon finds her near the Lord Commander's Tower,[8] where she dies in his arms[13] with a sad smile.[14] Jon burns Ygritte's body after the battle.[15]

Jon is later accused by Janos Slynt and Ser Alliser Thorne of breaking his vows by sleeping with the wildling.[16] When Jon is sent beyond the Wall to parley with Mance, Jon and Tormund share mead and honor Ygritte, Donal Noye, and Mag the Mighty. Mance claims that Ygritte lied about the Horn of Joramun never having been found.[17]

Jon, now Lord Commander of the Night's Watch, often thinks of Ygritte.[8] He muses that she told him, "You know nothing, Jon Snow" a hundred times.[7] On one occasion Jon mistakes the red-haired Melisandre for Ygritte.[18] After warning Jon to be wary of enemies, Melisandre tells him "you know nothing, Jon Snow",[19] as does Val when discussing Shireen Baratheon's greyscale.[20] Among others who have lost their lives, Ygritte appears in one of Jon's nightmares.[7] 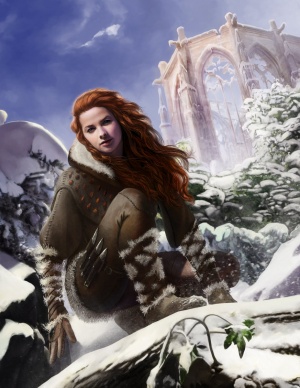 Strike hard and true, crow, or I'll come back and haunt you.[3]

It's dangerous being free, but most come to like the taste o' it.[9]

Jon: What if the man who stole you drank too much? What if he was brutal or cruel? What if he was stronger than you, and liked to beat you bloody?
Ygritte: I'd cut his throat while he slept. You know nothing, Jon Snow.[6]

A man can own a woman or a man can own a knife, but no man can own both. Every little girl learns that from her mother. And men can't own the land no more'n they can own the sea or the sky. You kneelers think you do, but Mance is going t' show you different.[6]

Ygritte: D'you remember that cave? We should have stayed in that cave. I told you so. 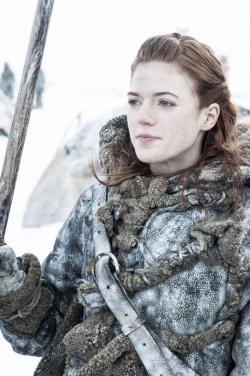 Rose Leslie as Ygritte in Game of Thrones

She wasn't wed and her weapon of choice was a short curved bow of horn and weirwood, but "spearwife" fit her all the same.[4]

I know one thing. I know that you are wildling to the bone.[6]

How could he explain Ygritte to them? She's warm and smart and funny and she can kiss a man or slit his throat.[21]

I know nothing, Ygritte, he thought, and perhaps I never will.[22]