For other uses, see Daeron Targaryen.

Daeron II Targaryen, known as Daeron the Good, was the twelfth Lord of the Seven Kingdoms from House Targaryen. Daeron brought Dorne peacefully into the realm, uniting all the lands of Westeros south of the wall.[3] His bastard half-brother, Daemon Blackfyre, challenged his rule and the result was a terrible civil war, the First Blackfyre Rebellion. Daeron died during the Great Spring Sickness in 209 AC.

Daeron was dignified. He was round-shouldered, with thin legs and a small pot belly. His kind thoughtful face had a certain quiet strength, though, and his eyes were clear and full of resolve. He wore the elaborate dragon crown of his father, King Aegon IV Targaryen.[4] On his coinage, he was depicted as clean-shaven.[5]

Daeron the Good was seen as as wise, just, and kind-hearted.[3] Not a warrior by any means, he was a cultured, scholarly man who kept company with maesters and other learned men.[6]

Born on the last day of 153 AC during the final years of the reign of his great-uncle King Aegon III, Daeron was the eldest son of Prince Aegon and Aegon's sister and wife, Naerys.[1]

After the failed conquest of Dorne during the short reign of Daeron the Young Dragon,[7] King Baelor the Blessed ascended the Iron Throne and arranged the marriage of his cousin, Prince Daeron, to Princess Myriah Martell of Dorne as part of a dual marriage pact between the two kingdoms to make peace.[8] King Baelor later officiated at the wedding ceremony.[citation needed] In 170 AC Daeron and Mariah had their first son, whom they named Baelor in Baelor the Blessed's honor. Three other sons would later follow.[9]

When his father became King Aegon IV Targaryen in 172 AC, Daeron became the heir to the Iron Throne and the Prince of Dragonstone. Daeron challenged much of Aegon IV's behavior. He became an obstacle to many of his father's schemes, most notably Aegon's plan to start an unprovoked war on Dorne. The king ignored Daeron's protests, built a massive fleet, and sent it to invade the Dornish coastin 174 AC. Daeron was relieved when the fleet was scattered and destroyed by a storm en route.[1]

At about the same time, Daeron's mother, Queen Naerys, was suddenly accused of adultery and treason by Ser Morgil Hastwyck, trying to cast doubts on Daeron's parentage. The matter was settled when Prince Aemon the Dragonknight defended his sister's honor and slew her accuser in a trial by combat.[1][10] According to the writings of Maester Kaeth in Lives of Four Kings, King Aegon had secretly started the rumors of Naerys's adultery. The king denied rumors he had used Morgil to instigate this tale so he would have reason to disinherit Daeron.[1]

Late in Aegon's reign, after the deaths of Aemon and Naerys, Aegon began to make thinly-veiled references to Daeron's alleged illegitimacy, insinuating that Daeron was not his son, but the product of an illegitimate union between his wife Naerys and their other brother, Aemon. It was also rumored that Aegon planned to disinherit Daeron in favor of a bastard son, Daemon.[1]

Aegon never formally disowned Daeron. Accounts differ as to why, probably because to do so would have meant civil war. Chief among Daeron's supporters was House Martell, due to his marriage to Princess Mariah Martell of Sunspear.[1] Daeron spent most of the last years of his father's reign on Dragonstone with his wife and children.[3]

On his deathbed, the spiteful Aegon legitimized all his bastards, with those born to noble mothers being called the Great Bastards.[1]

Upon learning of his father Aegon IV's death, Daeron departed Dragonstone for King's Landing. He chose to crown himself with his father's crown to quell the doubts and rumors about his parentage. Mindful of his duty to the realm, Daeron acted swiftly to put to right many of the wrongs of his father's reign. He replaced the small council with his own men, typically selecting wise and capable councillors. It took a year to repair the City Watch of King's Landing, whose officers were just as corrupt as Aegon had been.[3] 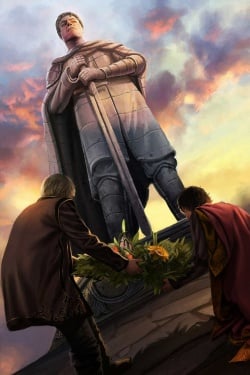 Daeron could not undo the legitimization of his father's bastards, but he treated them honorably and continued the incomes bestowed on them. He paid the dowry Aegon had promised the Archon of Tyrosh for his daughter, Rohanne of Tyrosh, to wed Daemon Blackfyre when Daemon was thirteen.[N 1] On Daemon's wedding day, Dareon granted him a tract of land near the Blackwater Rush so Daemon could build a keep.[3]

Because of Daeron's marriage to Mariah Martell, many noble Dornishmen and women flocked to Daeron's court, which served to give life in the Red Keep a foreign flavor, but this also alienated many of Daeron's other nobles and courtiers. Daeron and Mariah's marriage was happy and fruitful.[3]

Daeron began negotiations with his good-brother Maron Martell, Prince of Dorne, to unite Dorne with the Seven Kingdoms. After two years of negotiations an agreement was finalized. Maron was wed to Daeron's sister, Princess Daenerys, in 188 AC and, a year later, the Prince of Dorne swore an oath of fealty before the Iron Throne. At the Great Sept of Baelor, they placed a golden wreath before the statue of King Baelor the Blessed and stated, "Baelor, your work is done."[3]

To celebrate the peaceful joining of Dorne to the realm, Daeron founded Summerhall, a new palace in the Dornish Marches lightly fortified to represent the new peace. However, other Great Houses resented special privileges and rights which were allowed to House Martell. Maron was allowed to keep the royal title "Prince" and could collect taxes for the Iron Throne with less oversight from King's Landing.[3]

The king became known as Daeron the Good by smallfolk and lords alike. While he was more scholar than warrior, two of his sons were skilled at arms. The eldest became known as Baelor Breakspear for the incident at the tourney to celebrate the wedding of Daenerys with Maron of Dorne, in which Baelor unhorsed Daemon Blackfyre in the final tilt. Daerion's youngest son, Maekar, also proved a formidable fighter.[3]

The First Blackfyre Rebellion broke out in 195 AC and engulfed most of Westeros, but had been years in the making. Some lords, especially marcher lords, still hated the Dornishmen as King Aegon IV Targaryen had, and the peaceful Daeron was disliked for his ties with House Martell. Some nobles instead looked to Daemon Blackfyre, a Great Bastard who had been granted Blackfyre, one of the Valyrian steel swords of House Targaryen, by Aegon for his martial skill.[1] Daemon and Princess Daenerys had loved each other, but Daeron had his sister instead wed Maron Martell to bring Dorne into the realm.[11]

Daemon's, half brother and fellow Great Bastard Aegor Rivers, known as Bittersteel, motivated Daemon to finally make his claim. With the late King Aegon's rumors of Daeron's parentage in mind, some rebels, such as Ser Eustace Osgrey, saw Daemon as falseborn and a usurper of the Iron Throne.[6]

The Blackfyre rebellion broke out with battles in the riverlands, Reach, Vale of Arryn, and westerlands between those who supported the Black Dragon and those who supported the Red Dragon. Daeron was supported by another Great Bastard, Brynden Rivers, who was known as Bloodraven.[6] The rebellion ended at the Battle of the Redgrass Field in 196 AC with the death of Daemon and his two eldest sons, Aegon and Aemon. Bittersteel escaped and fled across the narrow sea with Daemon's surviving sons. The Blackfyre Pretenders continued to trouble the Seven Kingdoms for generations to come.[3]

After the First Blackfyre Rebellion, Daeron took lands, castles, and hostages from those lords who fought for House Blackfyre as punishment.[6] The rest of Daeron's reign was peaceful.

Daeron and Myriah Martell had four sons: Baelor, Aerys, Rhaegel and Maekar. Daeron's eldest son and heir-apparent, Baelor Breakspear, the Prince of Dragonstone, served as his father's Hand of the King during the later portion of his reign. Baelor served ably as Hand and many saw in Baelor a great man who would become a great king after his father. However, tragedy struck at the tourney at Ashford Meadow in 209 AC when Baelor was accidentally slain by Maekar during a trial of seven involving Ser Duncan the Tall.[12]

King Daeron II died the next year in the Great Spring Sickness, along with two of his grandchildren, Princes Valarr and Matarys.[6] He was succeeded by his second son, Aerys I Targaryen. Daeron had reigned for twenty five years, and most of the those years had seen peace and plenty for the realm.[3]

He was a good king, everybody says so. He brought Dorne into the realm and made the Dornishmen our friends.[6]

A king's mercy is a poisoned gift. Daeron Targaryen left me life, but took my pride and dreams and honor.[6]

- Eustace Osgrey to Duncan the Tall

The whole realm knew that the girl loved Daeron's bastard brother Daemon Blackfyre, and was loved by him in turn, but the king was wise enough to see that the good of thousands must come before the desires of two, even if those two were dear to him.[11]

Cite error: <ref> tags exist for a group named "N", but no corresponding <references group="N"/> tag was found, or a closing </ref> is missing